From Chloé to Fendi to Chanel, fashion designer Karl Lagerfeld has had one memorable career. Here, a look at his many achievements.

Over a career that spanned more than 60 years, designer Karl Lagerfeld, who died on February 19, 2019 at 85, was one of the most recognizable figures in the fashion industry, and beyond. Here, a time line of the pivotal moments.

• Lagerfeld is born in Hamburg, Germany. (The designer was always cagey about his birth date, which could be as late as 1938.)

• After winning an award in the coats category at the International Wool Secretariat, Lagerfeld is hired as an assistant to Pierre Balmain, a job he serves until 1958.

• The designer joins Jean Patou, where he designs 10 couture collections during his five-year tenure. 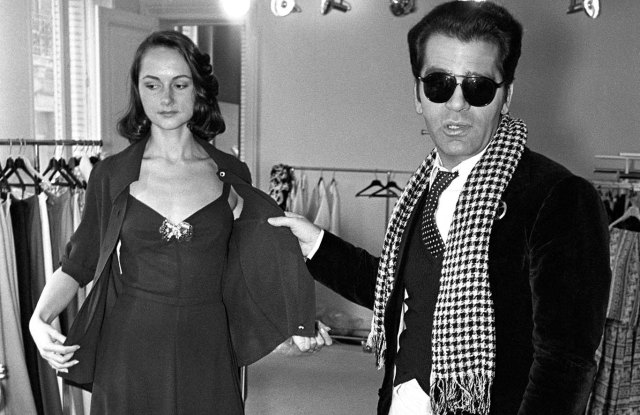 • He moves to Chloé, the first of two stints at the designer brand. Lagerfeld works alongside other designers brought on by founder Gaby Aghion, such as Graziella Fontana, Tan Giudicelli and Michèle Rosier.
• Lagerfeld starts freelancing at Tiziani, the Italian couture brand created by American designer Evan Richards, with one of his most famous clients being actress Elizabeth Taylor. Lagerfeld works for the brand until 1969.

• Lagerfeld joins Fendi as head designer for its ready-to-wear and fur collections.

• After three years working alongside other designers at Chloé, Lagerfeld takes sole creative control of the brand.

• WWD states Karl Lagerfeld is the most original rtw designer in Paris after presenting an Art Deco-inspired collection for Chloé. 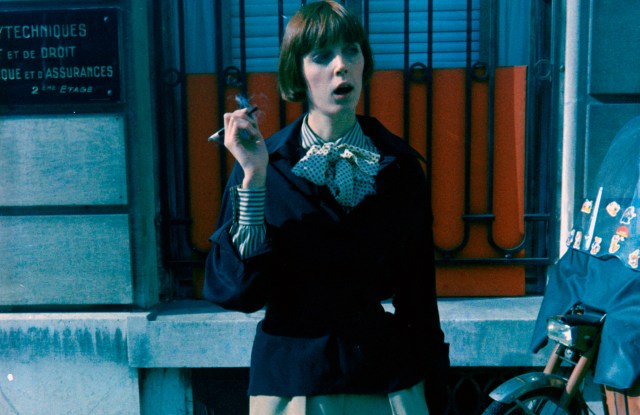 A look from the Chloé spring 1974 collection in an advance preview with Karl Lagerfeld.<br />Chloe Collection – 17 Oct 1973  Fairchild Archive/REX/Shutterstock

• Showing 200 looks, Lagerfeld’s Chloé show is said to have “set a new direction for the fashion world” in terms of the way he designed separates. Some looks included loose cardigans layered over V-necked pullovers and blouses with ruffled collars and sleeves.
• Lagerfeld is set to launch his first perfume under Chloé. He teams with pharmaceutical giant Eli Lilly to create a separate company, called Parfums Lagerfeld.

• While Lagerfeld has become known at Chanel for his elaborate fashion show sets, he actually started the practice during his time at Chloé, most notably his “Fellini’s Casanova” show. 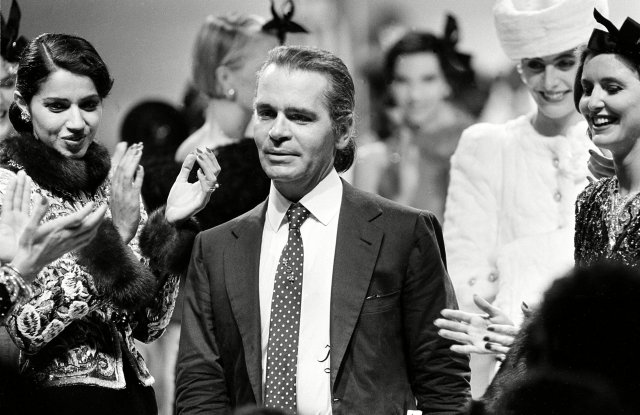 Karl Lagerfeld being applauded after his first Chanel show in 1983.  Jacques Langevin/AP/REX/Shutterstock

• With the end of his contract, Lagerfeld leaves his role as creative director at Chloé. He signs on as the new couturier at Chanel.

• Aside from his fashion designs, Lagerfeld becomes known for photographing his own campaigns for Fendi and Chanel. He also does photography for magazine editorials, such as V Magazine, Harper’s Bazaar and the German and Russian versions of Vogue. 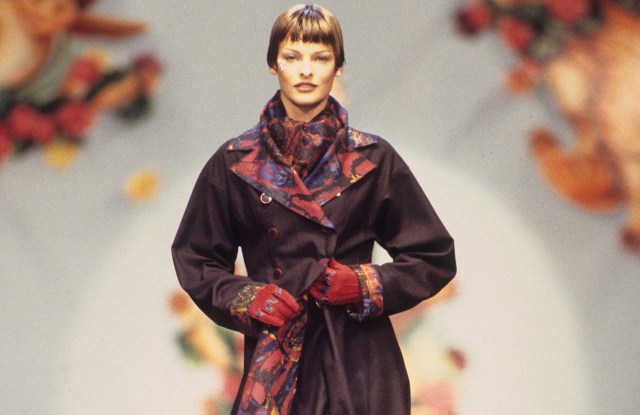 • Lagerfeld leaves Chloé. He is succeeded by Stella McCartney.
• The designer buys back his namesake brand from Dunhill Holdings PLC.

• Because of his love for books, photography and art, Lagerfeld opens a book shop, called 7L, in Paris. The store offers a large assortment of books on fashion, architecture and photography, among other topics. 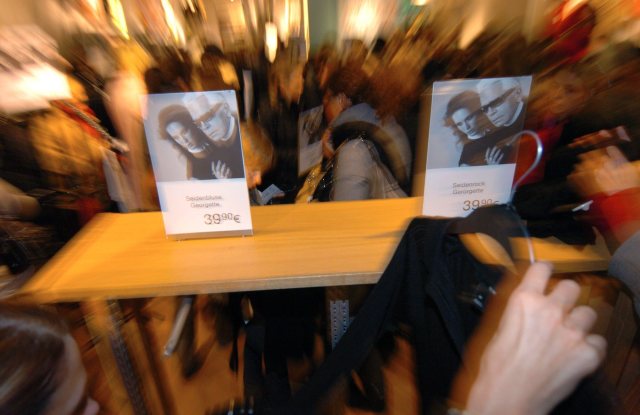 The scene at the launch of H&M’s collection with Karl Lagerfeld.  Daniel Karmann/EPA/REX/Shutterstock

• In his first foray into the mass market, Lagerfeld teams up with H&M to create a collection of women’s and men’s clothing. The collection sells out immediately after launch.
• Tommy Hilfiger Corp. acquires the Karl Lagerfeld brand. The parent company has plans to grow the brand internationally and add more products, like apparel and accessories categories.

• “A Lone King,” a documentary detailing Lagerfeld’s life is released in France. 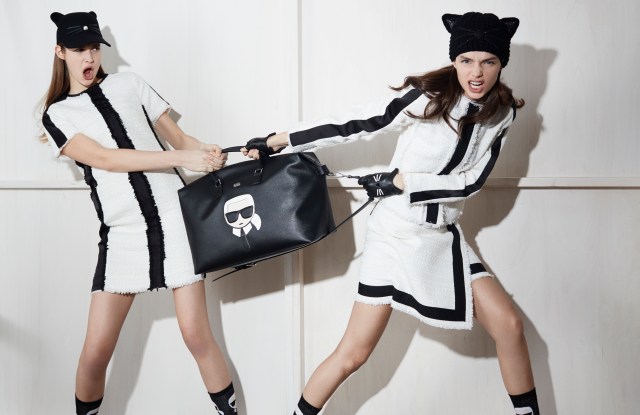 • Lagerfeld receives the Couture Council Fashion Visionary Award from the Fashion Institute of Technology, a special honor which was created for him.
• As Tommy Hilfiger Corp. gets acquired by Phillips-Van Heusen, Apax Partners, the private equity firm that previously owned Hilfiger, remains as the owner of the designer’s namesake brand.

• Lagerfeld teams with Carine Roitfeld on a traveling exhibition called “The Little Black Jacket” based on photographs taken by the designer of his favorite muses wearing Chanel’s famous jacket.
• Known for using the brand’s makeup for his fashion sketches, Lagerfeld teams with Shu Uemura for a holiday collection of color cosmetics. 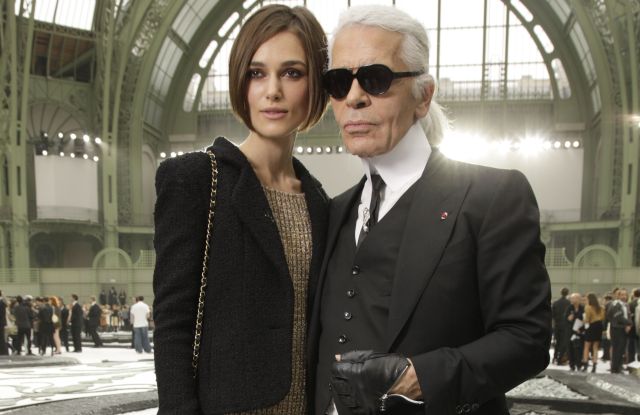 • Lagerfeld casts Keira Knightley as Gabrielle Chanel in a short film campaign called “Once Upon a Time…” that is set in 1913.

• The designer gets into the fragrance game again, this time creating a line of women’s and men’s scents under Interparfums. Industry sources estimate the brand will earn $70 million in its first year.

• Lagerfeld creates his first “haute fourrure” show for Fendi, bringing fur to the couture runway. This makes Lagerfeld the only designer to have two high-fashion shows in one week.
• For his namesake brand, Lagerfeld unveils his first kids’ collection, which includes 140 pieces.
• The British Fashion Council honors Lagerfeld with the Outstanding Achievement Award at the British Fashion Awards.
• Lagerfeld adds newspaper publisher to his lengthy list of job titles. The designer launches “The Karl Daily,” which is a satirical take on his sketches and photography and shows his brand’s latest collection. Some 150,000 copies are distributed in Europe and Japan. 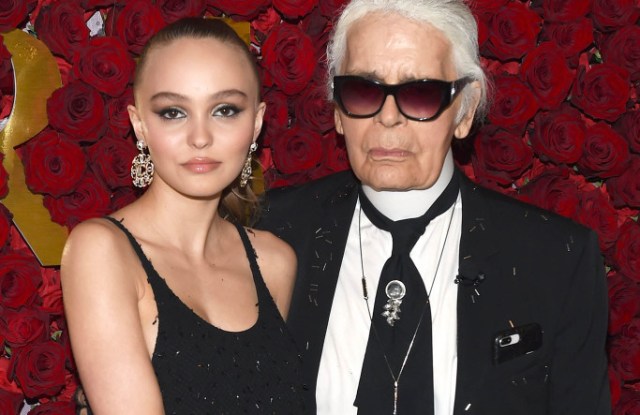 • Lagerfeld brings his namesake brand to SoHo with its first flagship.
• The designer teams with model Kaia Gerber for a capsule collection for the brand, which includes rtw, accessories, shoes and jewelry ranging from $35 to $1,045.
• Lagerfeld creates a color cosmetics line for his namesake brand in partnership with Australian beauty company ModelCo. The products include packaging featuring a colorful bust of Lagerfeld.

• For the first time in his 54 years at Fendi, Lagerfeld designs a men’s look for the brand’s runway show.