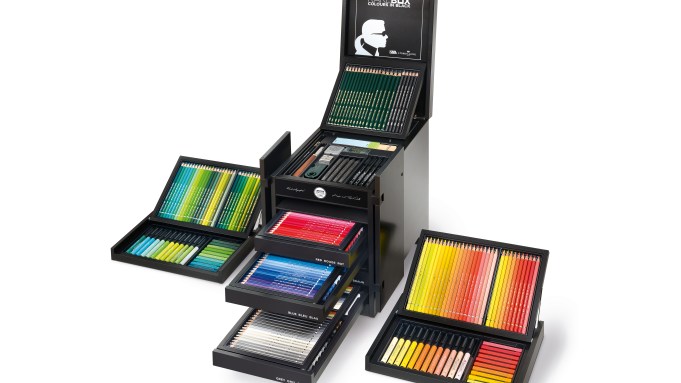 PENCIL PUSHER: Karl Lagerfeld, who continues to churn out provocative political cartoons for Frankfurter Allgemeine Zeitung, relies on his Faber-Castell pencil crayons. Now he has designed the ultimate set: a Karlbox containing 350 tools for drawing and painting, housed in a sleek black wooden box resembling a Chinese wedding cabinet.

Only 2,500 will be produced and sold exclusively beginning today at Faber-Castell stores, Karl Lagerfeld boutiques and Harrods in London. Select department and specialty stores — including Breuninger in Stuttgart, Jelmoli in Zurich, Le Bon Marché in Paris and Gump’s in San Francisco — will also stock the box from Sept. 19. The retail price is 2,500 euros, or $2,850.

Releasing images of the chest and details exclusively to WWD, Lagerfeld said Faber-Castell, established in 1761, has been a symbol of quality since he was a child in Germany. And he hasn’t stopped sketching since those days. “To me, drawing is like breathing and writing. These are things that almost relax me,” he said.

Implements are lined up in removable drawers and sorted by shade — all personally selected by Lagerfeld.

His favorite product line is the Albrecht Dürer range of pencils, and all 120 colors are included in the box. According to Faber-Castell, on the right paper, the pigments can be completely dissolved, and will then behave in the same way as classic watercolor paints. The box set also includes Polychromos color pencils, Pitt ink pens and Castell 9000 graphite pencils along with brushes, a foldable cup, erasers and sharpeners.

Faber-Castell bills itself as the world’s largest pencil manufacturer, capable of producing more than two billion a year. The family-owned firm generates annual revenues of about 577 million euros, or $652.1 million, according to its web site. Other famous users of its colored pencils from the past include Vincent van Gogh and Paul Klee.