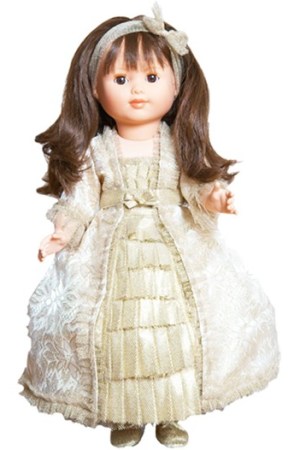 ALL DOLLED UP: Karl Lagerfeld is a recent supporter of the Carla Bruni-Sarkozy Foundation, whose goal is to promote access to culture, education and knowledge to fight social inequality. For Paris’ high-end toy store, Au Nain Bleu, Lagerfeld created a princess doll (220 euros, or $315 at current exchange) and a silk, tulle and lace princess dress to be worn by a little girl (830 euros, or $1,190), which will be sold through next year. Part of the proceeds go to the foundation started by France’s first lady. Lancôme in November became one of its patrons, as well.

ROYAL APPOINTMENT: Zara Phillips, Queen Elizabeth’s granddaughter, is trying her hand at the designer game. However, unlike many bold-facers who launch their own lines, Phillips at least has some qualifications for her new role. The 28-year-old, who is an equestrian champion, has designed a collection of equestrian gear for the British activewear firm Musto, where she has modeled in the past. The seven-piece line, called the Zara Phillips Collection, includes pieces such as a shower-proof training jacket, a funnel-neck gilet and fleece tops. All the pieces will be branded with the logo 176, which is Phillips’ number when she competes. “Zara has been heavily involved with the product designs right from the start of the project,” said Nigel Musto, managing director of Musto. “She is a…natural fit with the brand [and] we feel her new collection will significantly enhance Musto’s already successful offering in sports apparel.” The collection will launch for fall.

RICHEMONT’S RECORD RENT: London’s luxury shopping thoroughfare New Bond Street clearly isn’t experiencing a slump in property prices. Piaget, the watch and jewelry house owned by Compagnie Financière Richemont, has secured a 25-year lease on a five-floor retail and office space on New Bond Street for a record rent of 965 pounds, or $1,551 at current exchange, a square foot, which represents a total rent of 745,000 pounds, or $1.19 million, a year. The store was previously occupied by Bulgari, which retains two adjacent storefronts on the street.

In addition to the rental costs, Richemont also paid a premium of 1.9 million pounds, or $3 million, to secure the site. “It’s a very, very finite space between Asprey and Tiffany [on New Bond Street],” said Martin Thomas, director of central London retail at Jones Lang La Salle, who advised the property’s landlord. “When units do come up, brands want to be on that best pitch.” A spokeswoman for Richemont declined to comment on the reports.

Thomas added Piaget could be in the new space by spring. Prior to this deal, the highest rent recorded in the U.K. was 822 pounds, or $1,320 a square foot, when Dolce & Gabbana secured a store on New Bond Street last year.

THE GREAT VIONNET RESCUE: Museums across the U.K. have joined forces to ensure some of Madame Vionnet’s couture creations remain in Britain. London’s Victoria and Albert; the Bowes Museum, Barnard Castle, and Bath’s Fashion Museum have jointly acquired nine couture gowns designed by Madeleine Vionnet for a wealthy British socialite, after a temporary export ban was placed on them by the British government earlier this year. The three museums formed a consortium to raise the funds needed to purchase the gowns, which had belonged to Lady Foley, the wife of a former flight lieutenant in the Royal Air Force. Relatively few examples of Vionnet’s work exist in Britain, and the museums were keen to purchase Foley’s collection. “These evening dresses represent some of the best work of a designer who made garments of technical brilliance with a lyrical presence, and are an important addition to our collection,” said the V&A’s fashion curator, Sonnet Stanfill.

LIBERTY’S NEW MAN: After partnering with an eclectic group of labels and individuals, including Hermès, Luella Bartley, Grayson Perry and Ronnie Wood, London department store Liberty has lined up its next collaboration — with British streetwear label Fred Perry. The two labels will produce an eight-piece men’s wear collection together to launch in April, made up of classic Fred Perry designs incorporating Liberty prints. Pieces in the line include a Fred Perry Harrington jacket lined with Liberty fabric, a button-down shirt in a floral or paisley Liberty print fabric and a cotton pique polo shirt printed with a Liberty design. “We thought it would be really exciting for two British heritage brands to work together,” said Stephen Ayres, buying manager for men’s wear at Liberty. “And Fred Perry has never really used prints before.” The collection, which will be branded as both Fred Perry and Liberty of London, is part of Fred Perry’s series of Blank Canvas collaborations, which designers Ann-Sofie Back, Peter Jensen and David Saunders of David David all have worked on in the past.