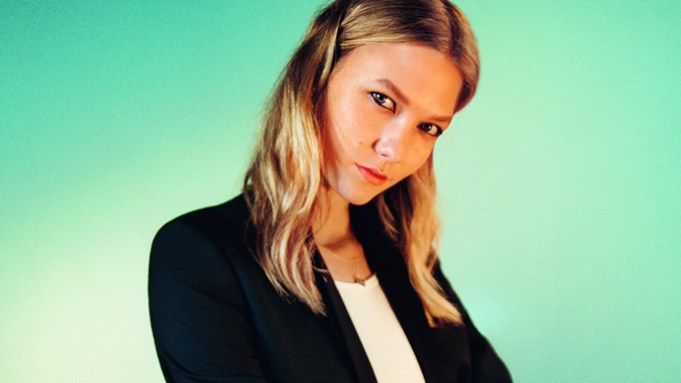 KLOSS UP: Karlie Kloss is back as the spring face of Topshop, eight years after her first campaign for the British retailer, when she appeared alongside Jourdan Dunn.

Kloss models the collection in a series of images shot on location in New York by Tyrone Lebon and styled by the brand’s creative director, Kate Phelan.

The campaign, which breaks today, will feature in stores, advertising, online and social media worldwide.

Phelan called Kloss “the ultimate Topshop girl and modern super — a world-renowned fashion figure, businesswoman, entrepreneur and philanthropist who will resonate with our global customers through her many talents, ambitions and passions.”

Topshop posted an interview with the model on its Web site, calling Kloss “a true role model in today’s technology-fuelled, socially networked world.”

In the interview, Kloss talks about how she learned computer coding, which she refers to as “the language of the future,” and how nervous she was on the first Topshop set eight years ago – one of her first modeling jobs.

“My grandmother brought me over from St. Louis. I was young and shy and super nervous. Luckily, I was shooting with Jourdan Dunn and we became overnight best friends.”

The Topshop feature also highlights Kloss’ many projects including Karlie’s Kookies, gluten-free treats made by the chef Christina Tosi. Proceeds go to underprivileged children around the world and young American fashion designers.

There is also the model’s YouTube channel Klossy, which features footage from fashion shoots and cooking tutorials from her New York kitchen.

If that weren’t enough, there is also Kode With Karlie, a scholarship that funds 21 young women from 11 states to take full-time courses in software engineering in the U.S.

Her main mantra is, be ambitious: “If you want to be successful, just dive in. Find something you really enjoy and if you’re truly passionate about something and put the hard work in, then success is inevitable,” she says in the interview.