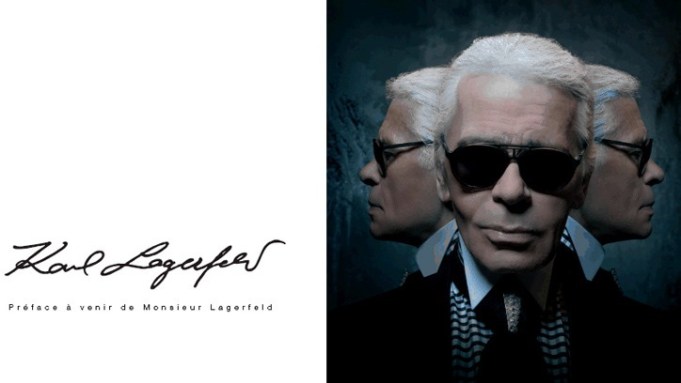 TROMPE L’OEIL: Pursuing his playful exploration of high-low chic, Karl Lagerfeld has trained his lens on the fall collection of French mail-order giant 3 Suisses. The designer photographed model Iris Strubegger, who also will appear in this fall’s ads for his eponymous label, wearing items from 3 Suisses Collection priced from 14.90 euros to 199 euros, or $18 to $121 at current exchange. Though the cover and layout may suggest otherwise, Lagerfeld did not have a hand in designing the sleek outfits. But the designer, who is also creative director at Chanel and Fendi, said he was eager to repeat his foray into the mass market, following his collaboration with H&M in 2004. “My dream is to turn the whole house of Lagerfeld into this kind of [mass] business, because I am at the peak of luxury with Chanel and Fendi,” he told WWD. “Being at both ends of the market is the height of luxury.” Lagerfeld said he had yet to discuss his project with the new management team being put in place at Karl Lagerfeld SAS. But lest they think his love of mass consumerism is feigned, the designer posed on top of a black washing machine for the back page of the 3 Suisses catalogue. “It is so chic and pretty,” he said of the household appliance. “I would like to have one — not to wash clothes but to put in my dressing room to hold my dirty laundry.”

A|X MARKS THE SPOT: Armani Exchange marked the opening of its new concept store on Los Angeles’ Robertson Boulevard Tuesday night with a disco party hosted by Elle that drew Kelly Osbourne, Kim Kardashian, Keri Hilson and Katharine McPhee. Gabrielle Union, whose show “Flash Forward” just got canceled, said, “In this economy, you don’t feel like a jerk stepping around in some Armani Exchange shoes, as opposed to a pair of $2,000 red-soled shoes.” Union should be able to buy more shoes soon — she’s producing the movie “The Vow” for Lifetime next.

LIVING IN ARMANI: Speaking of the world of Giorgio Armani, on the heels of the opening of his first luxury hotel in Dubai last month, the designer has agreed to create a group of exclusive residences in Istanbul. Armani teamed up with Asta Real Estate, which is investing $300 million on the construction of the Maçka Residences project in the city — a three-tower complex spanning more than 75,350 square feet. Lobbies, common areas and several apartments will be designed and furnished by Armani/Casa. In addition, the brand’s architects will be available for consultancy upon request. The complex is expected to be unveiled in 2012.

NANETTE ALFRESCO: Just in time for summer, Nanette Lepore has whipped up a little black dress for female staffers at three properties run by Thompson Hotels. The designer is suiting them up in the outdoor lounges at the Thompson LES in Manhattan and at Donovan House in Washington. She also is doing the honors at The Hollywood Roosevelt’s Tropicana pool bar in Los Angeles.

FRENCH ALLIANCE: The Designers & Agents show is getting ready to go to Paris for the first time, and it already has quite a lineup for the Oct.1 to 4 event at Galerie Nikki Diana Marquardt in the Marais. Among the 30 exhibitors will be six Council of Fashion Designers of America members. They are Mary Ping, Rozae Nichols, Lutz & Patmos, Under.ligne by Doo-Ri Chung, Selima Optique, and VPL by Victoria Bartlett. Other exhibitors will include Beryll, Mason by Michelle Mason, Thea Grant and Herff Christiansen.