The actress did a photo shoot - and celebrated her birthday. 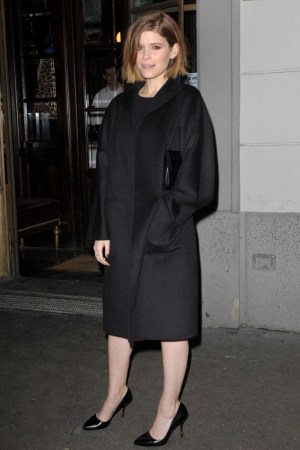 MARA TO THE MAX: It’s been an eventful week for “House of Cards” star Kate Mara. In Milan for Max Mara as the recipient of the 2015 Women in Film Max Mara Face of the Future Award, Mara did a fashion shoot for the Italian fashion brand on Wednesday and then later repaired to Da Giacomo Bistro where she was the guest of honor at a private dinner.

Turns out it’s also her birthday, which everyone realized when four waiters arrived serenading her — in French, oddly — and presenting her with a tiny strawberry tart punctured by a single red candle.

Five days ago, Mara wrapped shooting of “The Martian” in Budapest, a drama about a voyage to Mars gone terribly wrong. “I play one of the astronauts,” she explained. “Half of the time we were in little flight suits and the other half in the full uniform, which weighs about 30 pounds.”

She also recently finished the thriller “Man Down” about a U.S. Marine, played by Shia LaBeouf, who just returns from Afghanistan to a post-apocalyptic America.

Mara was mum on her next project, but suggested it was a film in a very different genre. “I like to keep switching it up,” she said, noting she would also make an appearance during Paris Fashion Week as a guest of Valentino.