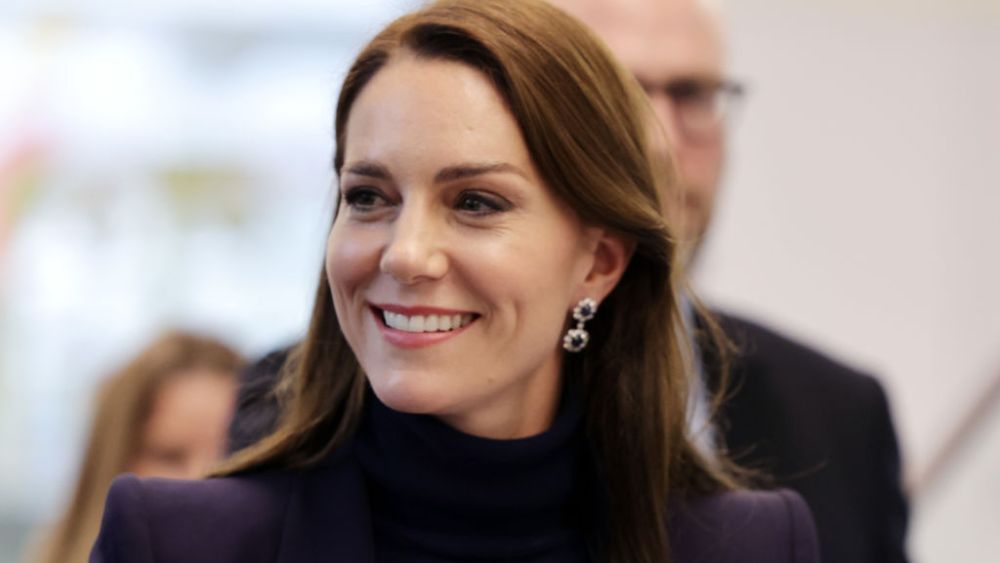 Kate Middleton de-boarded the plane at Boston’s Logan Airport on Wednesday in a business-ready ensemble.

The Princess of Wales, who is joining her husband, Prince William, on a U.S. tour, arrived at the airport wearing a structured navy blazer with matching tailored pants from Alexander McQueen.

She coordinated the look with a navy turtleneck sweater, a black belt and black pumps from Gianvito Rossi. She accessorized with a pair of diamond and sapphire drop earrings.

The Princess of Wales complemented Prince William, who wore a navy suit, a white shirt and a blue patterned tie with black lace-up formal shoes.

She took her usual signature approach to makeup, with a matte lip and a small touch of mascara. She also sported a hint of eye shadow. Her hair was parted to the side and done in its usual straightened style.

The Prince and Princess of Wales are attending the second annual Earthshot Prize Awards ceremony to acknowledge celebrities whose work is helping to repair the planet. The couple will spend the next three days from their arrival learning about environmental issues and meeting people who are combatting the effect of climate change in the city.

The trip also marks the first time the couple embarked on a tour to promote their sustainability agenda. They ascended to the position of Prince and Princess of Wales in September after the passing of Queen Elizabeth II. William’s father, Prince Charles, succeeded as king, and the Prince and Princess of Wales are seen as wielding greater influence to propel their causes.

Kate Middleton and Prince William’s U.S. tour marks the couple’s first tour of America as the Prince and Princess of Wales. William will present the Earthshot Prize for sustainability at the MGM Music Hall at Fenway in Boston. The royals last visited the U.S. for a New York and Washington, D.C., trip in 2014.