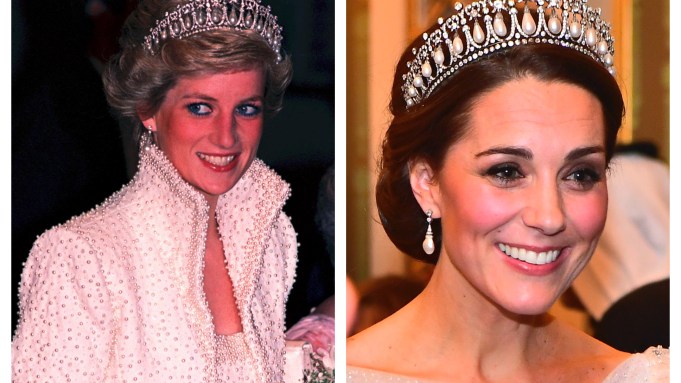 The Duchess of Cambridge’s style is uniquely her own, defined by her affinity for coat dresses, structured pieces and her championing of heritage British designers. Still, Kate Middleton has regularly paid homage to her late mother-in-law, Princess Diana, through her high-fashion looks since joining the royal family in 2011.

Prince William helped set the precedent of Middleton paying homage to Princess Diana when he proposed to the duchess with his mother’s 12-carat sapphire engagement ring.

“I thought it was quite nice because obviously she’s not around to share in any of the fun and excitement with all of us,” Prince William said during the couple’s engagement interview in 2010. “So this is my way of keeping her close to it all.”

Middleton has looked to other pieces in Princess Diana’s jewelry collection numerous times over the last decade. Most notably, she regularly wears the Lover’s Knot tiara — one of the most recognizable tiaras of the British royal family — to royal engagements.

The tiara, which is designed with 19 baroque pearls and rose cut diamonds set in a series of heart-shaped loops, was a favorite of Diana’s after she was gifted the piece by Queen Elizabeth II as a wedding present. Diana ultimately returned the tiara to the queen after her divorce from Prince Charles in 1996.

In line with royal tradition, Prince William and Middleton introduced their three children on the steps of the Lindo Wing at St. Mary’s Hospital in London, where the duchess again paid homage to Diana through her custom looks. When introducing Prince George in 2013, Middleton wore a custom blue polka dot dress designed by Jenny Packham that resembled the polka dot dress that Princess Diana wore when leaving the hospital with Prince William in 1982.

Middleton again paid homage to the princess in 2018 after giving birth to Prince Louis. The duchess wore a custom red Jenny Packham dress designed with a Peter Pan collar. The look resembled the dress worn by Diana in 1984 after she gave birth to Prince Harry.

During her first royal tour of Pakistan last fall, Middleton repeatedly referenced Diana’s looks that she wore during her many visits to the country in the Nineties. Middleton paid respect to Pakistani culture by wearing several traditional looks designed by Catherine Walker and Maheen Khan, including a turquoise shalwar kameez and matching headscarf during a visit to the Badshahi mosque in Lahore, which Diana had also visited in 1991.

Click through the above gallery to see more photos of Kate Middleton channeling Princess Diana’s style.