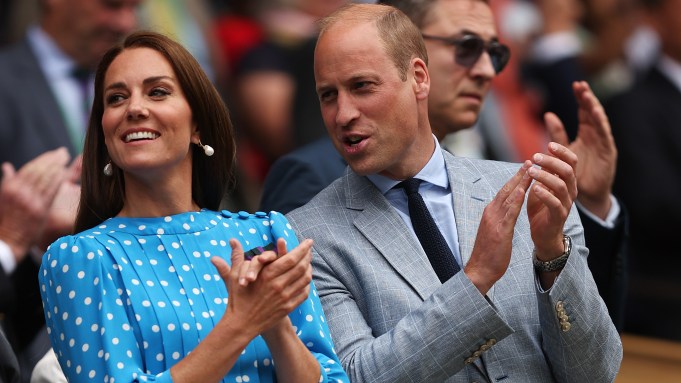 Another year of Wimbledon invites another slew of A-list guests.

This year, fans and celebrities alike couldn’t wait to watch some of their favorite tennis players go head-to-head once more.

Kate Middleton, Duchess of Cambridge, and her husband Prince William, plus fresh faces such as “Bridgerton” stars Nicola Coughlan and Simone Ashley, as well as “Normal People” actress Daisy Edgar-Jones, made appearances throughout the two-week tournament.

Household names like Mary Berry and Sir Ian McKellen watched from their respective boxes. Middleton’s parents Carole and Michael Middleton also made an appearance or two to cheer on their favorite competitors.

The scene was British A-listers galore as Coughlan and Ashley watched amongst the spectators, with the former sitting with Edgar-Jones. Michelle Dockery of “Downton Abbey” and her fiancé Jasper Waller-Bridge were also seen sitting together.

Sienna Miller, another Wimbledon frequenter, also attended with her new boyfriend Oli Green, while her ex-partner Tom Sturridge sat behind the couple with his girlfriend, fashion writer and designer Alexa Chung.

Famous English athletes such as David Beckham, who is a Wimbledon regular like Miller and Middleton, and diver Tom Daley made appearances throughout the tournament, with the former sitting in the Royal Box with his mother Sandra Beckham.

Other stars who watched from the stands include Hugh Grant, Dominic Cooper, Gemma Chan, Edward Enninful, Thomas Brodie-Sangster and Talulah Riley, among others.

Click through the gallery above to see some of the big celebrity moments at Wimbledon this year.

Why Tennis Players Wear All White at Wimbledon