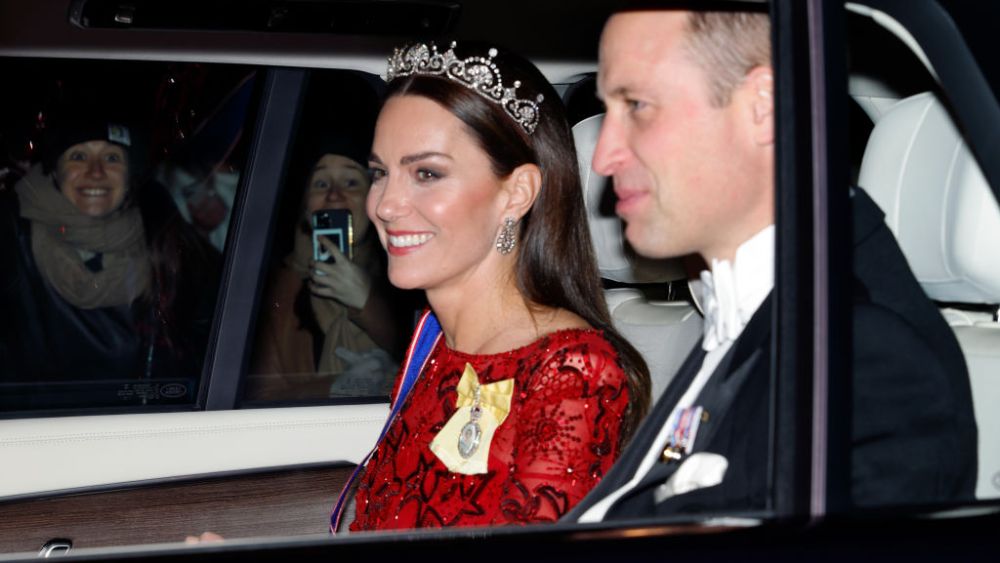 Kate Middleton joined her mother-in-law, Queen Camilla, in hosting a reception for members of the Diplomatic Corps at Buckingham Palace in London on Tuesday.

For the occasion, the Princess of Wales wore a red floral-embroidered Jenny Packham dress from the brand’s pre-fall 2019 collection.

Middleton made a major jewelry statement by accessorizing with the Lotus Flower Tiara.

The Lotus Flower Tiara was originally a necklace made by Garrard London that was given to King Charles’ grandmother, Queen Elizabeth the Queen Mother, as a wedding gift. The necklace was later dismantled, and the diamonds and pearls were upcycled to create the Lotus Flower Tiara.

The tiara belonged to Princess Margaret until she died in 2002. Afterward, it returned to the royal vault and wasn’t seen again until Middleton wore it in 2013 for a Diplomatic reception at Buckingham Palace when she was the Duchess of Cambridge.

Catherine, Princess of Wales also accessorized with the late Queen Elizabeth II’s diamond orbital earrings. In honor of the ceremony, she also sported the Royal Victorian Order sash and badge, along with the Maltese cross. She pinned the sash with a Bentley & Skinner art deco diamond set brooch. The left side of her dress was also pinned with the Royal Family Order of Queen Elizabeth II, which she was awarded as duchess in 2017.

The Prince and Princess of Wales recently enjoyed their first tour of the U.S. last week since they ascended to their new titles.

The royal couple spent three days in Boston as Prince William presented the Earthshot sustainability prize. The purpose of the couple’s trip was to spread a message of sustainability. They met with Boston Mayor Michelle Wu on their trip to hear about how the city is combating rising sea levels.