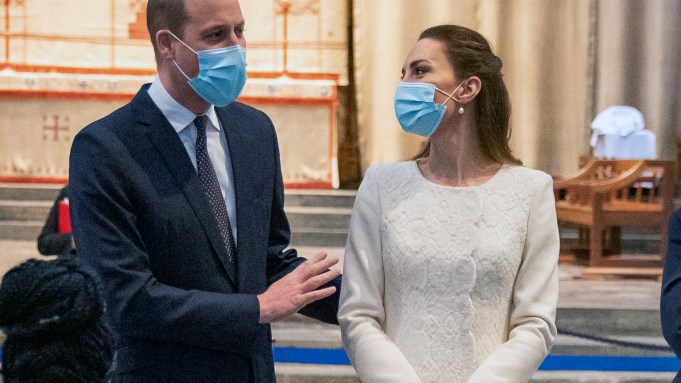 The Duke and Duchess of Cambridge are honoring the U.K.’s National Day of Reflection with a visit to a COVID-19 vaccination center.

Prince William and Kate Middleton made an appearance at the center, located at London’s Westminster Abbey, on Tuesday to mark the one year anniversary of the U.K.’s first COVID-19 lockdown. The vaccination center’s location is also where the royal couple got married in 2011.

“Today we remember all those who have lost lives as a result of the pandemic over the last 12 months,” the royal couple wrote on their joint Instagram, sharing pictures of themselves placing flowers and lighting candles in remembrance.

Middleton, who has long had an affinity for coat dresses, wore an ivory-hued Catherine Walker coat dress with lace detailing for the appearance. She paired the coat dress with brown suede pumps and a matching clutch.

The royal couple met with staff members and patients at the vaccination center, which is one of the largest in London.

Prince William and Middleton’s appearance comes at a time of turmoil for the British royal family, as they continue to deal with the public fallout following Prince Harry and Meghan Markle’s tell-all interview with Oprah Winfrey earlier this month, where Markle stated that members of the royal family had “concerns and conversations about how dark [their son Archie’s] skin might be” before she gave birth in 2019.

The royal family has issued short responses to the interview, with Buckingham Palace releasing a statement two days later stating “the whole family is saddened to learn the full extent of how challenging the last few years have been for Harry and Meghan. The issues raised, particularly that of race, are concerning. While some recollections may vary, they are taken seriously and will be addressed by the family privately.”

Prince William also responded to Markle’s allegations of racism during a visit to a school in East London on March 11, where he responded to a reporter’s question about the allegations by stating “we are very much not a racist family.”

While Prince Harry stated that his relationship with his brother and father, Prince Charles, was strained, it’s been reported that the family has begun talking again since the interview aired.