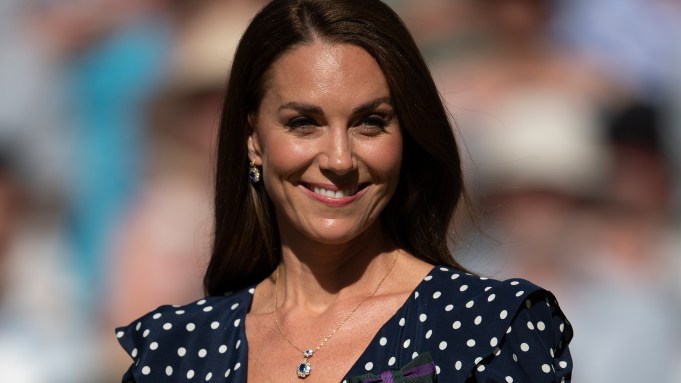 The Duchess of Cambridge brought her signature elegant style to multiple matches, relying on her go-to fashion designers in order to make an impact with her courtside looks. Many of the duchess’ outfits also gave a nod to the late Princess Diana, who Middleton has been referencing more often through her fashion in recent appearances.

She began her appearances on Tuesday where she rewore a blue pleated polka-dot dress from one of her favorite designers, Alessandra Rich. She paired the dress with pearl-drop earrings, white heels and a Mulberry bag. Middleton also supported female tennis players with her look, pinning a green and purple bow — the badge that female members of the All England Tennis Club wear — to her dress.

Middleton then returned the 2022 Wimbledon championship on Saturday, rewearing another look from her closet: a bright yellow midi dress from London-based Serbian designer Roksanda Ilinčić. She paired the dress again with the green and purple ribbon and an LK Bennett saffron straw hat.

The duchess wore the dress to present tennis champion Elena Rybakina with her first Wimbledon trophy after she won the Women’s Finals match against Ons Jabeur.

Middleton returned to Wimbledon the following day for the men’s finals match, where she presented the championship award to Novak Djokovic. For the appearance, Middleton again looked to Alessandra Rich, wearing a navy polka-dot dress similar to the dress she wore for her first 2022 Wimbledon appearance.

The duchess sat in the royal box alongside husband Prince William and their eldest son Prince George, who attended his first Wimbledon game.

Alessandra Rich has been a go-to designer for Middleton of late. The duchess wore a similar white polka-dot dress at her appearance at last month’s Royal Ascot, where her look drew comparisons to an outfit worn by Princess Diana in 1988 at the event.