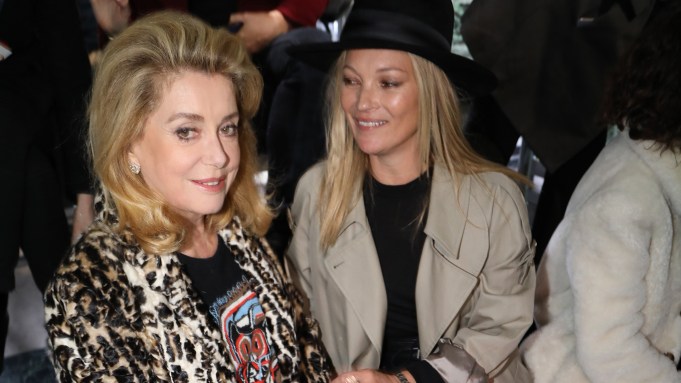 COLD FRONT: Clad in barely-there minis, Eva Herzigova and Charlotte Gainsbourg braved the cold at the Saint Laurent show on Tuesday night, perched on marble seating in a stripped-back, industrial set rigged with scaffolding in the courtyard of the brand’s future headquarters on Rue de Bellechasse.

“I love what Anthony [Vaccarello] does. I met him just before he started at Saint Laurent, so I was already wearing his brand, and to switch to Saint Laurent is very chic,” said Gainsbourg, who is working on two films: “La Promesse de L’Aube,” an adaption of an autobiographical novel by Romain Gary, and “The Snowman,” alongside Michael Fassbender and Rebecca Ferguson. “Then there’s my album, which I still need to finish,” she sighed.

Guests including Irina Lazareanu and Amber Valletta huddled under black blankets. “The set is cold but incredible,” shuddered Valletta, who is busy reading scripts, waiting for the right part. “There are more and more good roles on television than in film for women, but I think we’ll start to see a change, the tide always turns. Just seeing the last Oscars and Golden Globes, there was a big shift in female empowerment,” she said, as a trench-clad Kate Moss sauntered by, hooking arms with Lou Doillon.

“I’m superexcited, I just landed from Marrakech two hours ago. It’s going to be more than a museum, it’s a cultural center, with a space for temporary exhibitions that will be open to young Moroccan artists, as well as an auditorium. Films about Yves Saint Laurent will be screened all day — documentaries, interviews, etc. And in the evening, we’ll be able to present films, host concerts, or stage symposiums. There will be a big library with thousands of books on literature and geography dating from the 12th to the 20th century,” said Bergé, adding that there will also be collections dedicated to botany, Berber culture and Yves Saint Laurent.

The Fondation Pierre Bergé — Yves Saint Laurent is planning a retrospective for the opening of the Paris museum, he added. “Each September through January there will be an exhibition themed around Saint Laurent. For example, the Russia of Saint Laurent, or the Spain of Saint Laurent,” said Bergé, before switching to the show at hand. “I’m thrilled to be here.”