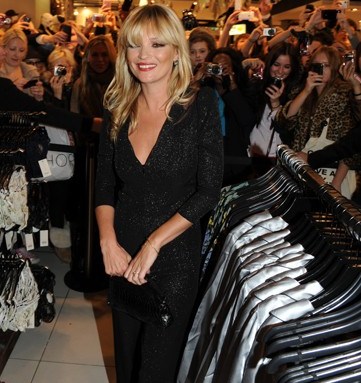 GOODBYE, BUT NOT FAREWELL: Kate Moss unveiled her last official collection for Topshop at the brand’s Oxford Circus flagship in London on Monday night. A crowd of about 200 shoppers who had been invited to the event filled the Kate Moss space, taking pictures of the model, grabbing fistfuls of clothing and listening to DJ Wildcat Will’s tunes.

The collection — comprised of 109 styles — will be sold in Topshop stores worldwide as of today. Topshop owner Sir Philip Green said he and Moss would continue working together. “I’m not going anywhere and neither is she,” he said. “This collection still works, and our relationship hasn’t ended. But we now need to go away for a while, and think about how to do things differently. This collection takes a lot of hard work — she wants to do other things and so do I — but our relationship is as strong as ever.”

Green, accompanied by his daughter Chloe, who has just begun to work at Topshop’s parent Arcadia Group, said the collection was set to remain on the shop floor for three to four weeks — if it doesn’t sell out sooner. The new collection features some of Moss’ bestsellers and some limited edition items such as the floor-length emerald green gown. The bulk of the collection is new, however, and includes sequinned jackets, embroidered or fur-trimmed dresses, dramatic black feather stoles, fitted cardigans and lots of flower-print dresses.

STYLEMAKER KANYE: From fashion outsider, to fashion week ubiquitor, to fashion honoree, Kanye West has had a quick trajectory to the top in less than five years. Though West has bemoaned the fashion industry’s lack of respect for him as a style icon, he’s finally gotten his due when the Accessories Council Excellence Awards recognized him as Stylemaker of the Year for 2010.

Karen Giberson, president of the Accessories Council said, “Kanye West is one of the most influential men in pop culture — from music to fashion. His personal style, whether on stage, in his videos or in his leisure time, pushes the envelope and continues to inspire both designers and shoppers. As a strong supporter of the luxury accessories industry, we are delighted to honor him.”

A DIFFERENT VIEW: Following its 3-D fall ad campaign, A|X Armani Exchange has launched a pair of aviators to watch it with. The unisex Eighties-inspired model produced by Safilo Group is equipped with the latest technology in three-dimensional viewing including several layers of coating to minimize distortion and glare. The glasses carry a $58 price tag and will be available starting from December exclusively at A|X stores in the U.S. as well as on armaniexchange.com.

MODEL UNIFORM: Erin O’Connor is the latest model to try her hand at design. O’Connor, together with her stylist and designer friend Kate Halfpenny, has launched a line of T-shirts and bags under the label She Died of Beauty. All the pieces bear tongue-in-cheek slogans, such as “She Died of Beauty,” “She Died of Individuality” or “She Died of Perfection.”

“Erin and I were thinking for a long time about doing something together and our friend came up with the slogan,” said Halfpenny. “It’s us poking fun at the fashion industry but in a humorous way.” The pieces are all made from organic cotton, printed with water-based ink and using only sustainable energy generated from wind power and solar power. The T-shirts retail at 40 pounds, or $64, while the bags retail at 20 pounds, or $32.

The collection is sold on the company’s Web site, shediedofbeauty.com, which ships internationally, and launched this week at the British online boutique youngbritishdesigners.com. Halfpenny — who also designs evening and bridalwear under the label Halfpenny London — added the duo is considering adding some embellished, cashmere pieces to the collection too.

GOLD RUSH: Calling all gold diggers. Cartier has collaborated with French mint Monnaie de Paris on a diamond-set gold coin, due to be auctioned off in aid of UNESCO. The date of the sale is yet to be confirmed. Limited to an edition of 29, the coin on one side depicts UNESCO World Heritage Site the Taj Mahal, paying homage to France’s ongoing yearlong cultural festival, India in France.