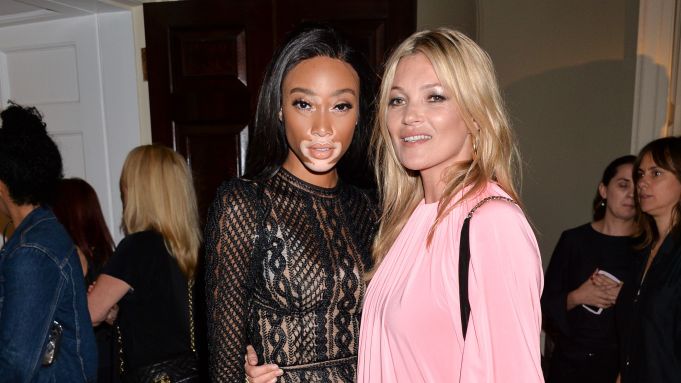 The British model and the Italian photographer, who worked together on the original campaign for Obsession in 1993, have reprised their roles for the latest iteration of the scent, which is due out on beauty counters next month.

“I still love her, but more like a sister I think,” said Sorrenti said of Moss. “It was great working on the campaign now. We looked through old images and revisited the pictures. We took ones that we didn’t use, re-edited them and figured out a new way to display them again.”

In addition to promoting the campaign, the photographer said he’s working on a couple of books and commercial work, as well as a feature film, although he wouldn’t give up the name.

The evening’s decor tapped into the mood of the new fragrance, with black and white outtakes of Moss from the 1992 campaign, where she was photographed semi-naked or topless.

In the library, numerous framed pictures of the model were scattered on tables, while enlarged versions of the same photos were prominently displayed in another room. The terrace overlooked a sprawling lawn that also showcased large-scale images of the British model.

During the evening, guests including Harlow stepped inside a tiny room with collage-covered walls to take selfies. “It’s so amazing,” said Harlow of Moss. “To have a career that is so meaningful and to have a display created of all these photos – it’s like a museum.”