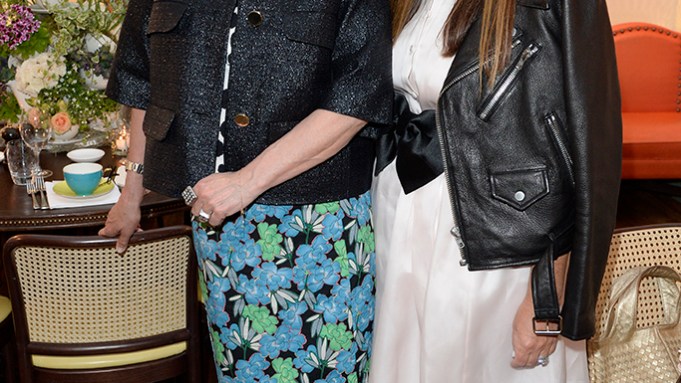 FLOWER GIRLS – Deborah Lloyd, Kate Spade New York president and chief creative officer, has a healthy competitive streak. While horticulturalists are competing for the prize of best garden design at the annual Chelsea Flower Show this week, retailers in the neighborhood have been battling it out for Chelsea in Bloom, the annual floral art competition staged by local property owners the Cadogan Estate in association with the Royal Horticultural Society.

The effort paid off, and the American brand won two awards for the giant flower flamingos created by Wild At Heart florist Nikki Tibbles that will stand sentry at the Sloane Square store until May 23. “They don’t do first, second and third prizes – we wish they did because we’re so competitive,” said Lloyd at a dinner she hosted Wednesday night at Daphne’s in South Kensington to celebrate the flower show. “We won the Innovation Award, one of the top three awards, and a Gold Award.”

The theme for this year’s prize was Fairy Tale Flowers, which was interpreted by brands including Fendi, Jo Malone, Lulu Guinness, Agent Provocateur, Brown, Brunello Cucinelli, Club Monaco, the facialist Sarah Chapman – who won Best Floral Display – and Smythson, which won the Highly Commended award. “A lot of people did Alice in Wonderland as a story, but we’re the only one that pulled out the flamingos,” added Lloyd, who plans to visit the flower show this week. “I love English garden roses; they were in my bouquet when I got married. I love all the very traditional English flowers, like foxgloves and delphiniums. I’m not a cactus girl – that’s a boy thing.”

Tibbles, who also created the dinner table centerpieces of wild flowers and roses sprouting from teacups, was among the guests and had spent the day at the show, which takes place on the grounds of the Royal Hospital Chelsea. “I love the old fashioned stuff,” she said. “With the garden displays, you sometimes feel like you’ve seen it all before, but the main tent is just amazing: Full of stunning lupines, begonias on steroids, floxgloves and sweet peas – and it smells incredible.”

As Lloyd left the dinner, she donated the two 7-feet tall paper flamingoes that had stood watch over diners to Tibbles’ charity, The Wild At Heart Foundation, which aims to raise awareness of the world’s 600 million stray dog population. They will be auctioned off, Tibbles said.