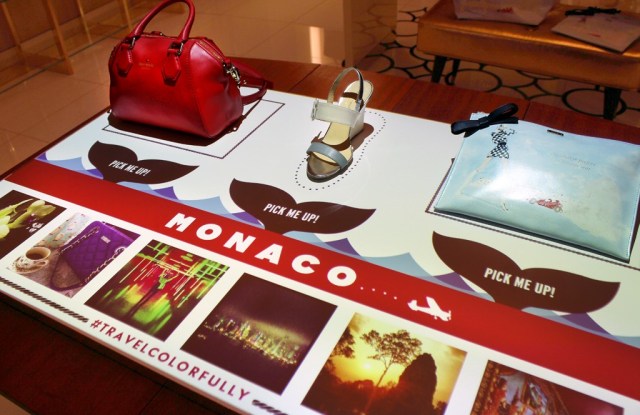 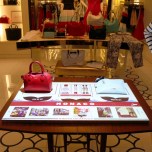 KATE SPADE’S ROOST: In an effort to make its stores more interactive, Kate Spade has launched Perch technology in its stores. Perch, an interactive display system, seamlessly integrates rich media content into the in-store shopping experience. “Our stores are great expressions of the brand,” said chief marketing officer Mary Beech, “but we were looking for an opportunity to bring content to life.”

In the Kate Spade store in the Flatiron District, Perch is suspended from the ceiling above a merchandising table near the front door, although in some stores, the unit may project on to a wall. It projects animated images onto the surface below. An optical sensor inside the Perch unit detects when a product is picked up or a customer touches the table. The display responds in real time.

Using its hashtag, #travelcolorfully, as a starting point, Kate Spade introduced a live feed of Instagram photos of customers in exotic locations. Other areas on the table are devoted to style tips and ad campaign videos. There’s also a “create the outfit” panel with looks spinning and the sounds of a slot machine. If a consumer picks up a shoe or handbag displayed on the table, the reward is a game or other content.

“We’ve seen a higher sell-through for products on the table,” Beech said.

The experience will be available next month in select Kate Spade stores in Boston; Chicago; Dallas; Orlando, Fla.; Bellevue, Wash., and two units in London.

Beech said the technology is “very cost effective,” adding that the system will be installed in stores at least through 2014. “We’re constantly thinking about what’s next for our customer and online,” she said.