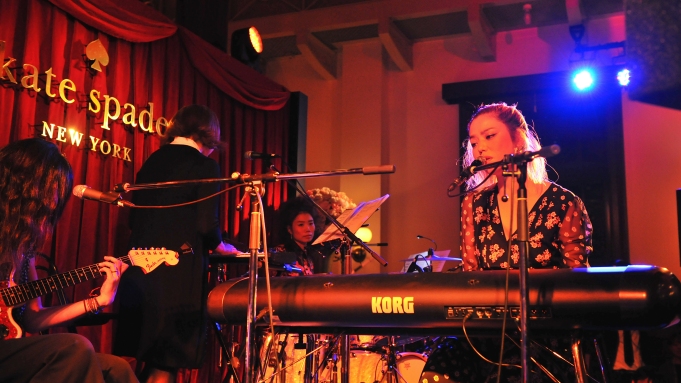 The sirens of song inspired Deborah Lloyd’s fall collection for Kate Spade so the brand revisited that theme for an event in Tokyo to unveil her clothes and accessories infused with musical references.

“I was inspired by these amazing firebirds…these divas. Whether it was Billie Holiday singing the blues, or Sade that sultry siren, or whether it’s ballerinas,” said Lloyd, the president and chief creative officer of the brand.

The intimate event, staged in a café space of a historic bank building, included live music by a female jazz vocalist. But the highlight of the night was a performance by local star Chara, who rose to fame in the Nineties as a singer and actress and remains a household name today. Attendees, including model Jourdan Dunn, sipped Moët & Chandon and snacked on finger foods including tiny hamburgers.

“Japan is just such an important market for us. They’ve always been so supportive, the brand has been looked after so well here that we really wanted to celebrate with them and also preview the collection just before it arrives in store,” Lloyd said, adding that the business is performing well in the country.

Dunn, who was last in Tokyo in 2015, brought her six-year-old son along for this trip and will be staying a few extra days in the city to do some sightseeing.

“He’s really made plans for us,” said the model, who is fronting the brand’s spring-summer campaign. “We’re going to Legoland, Disneyland and a few museums. So we’re going to cram all that in in like four days.”