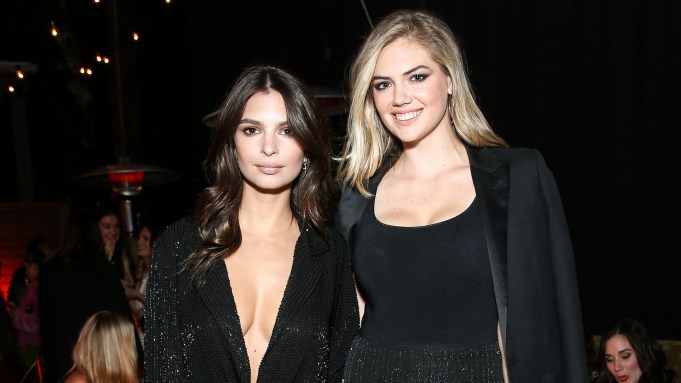 With the holidays in full swing, brands are taking the opportunity to throw more parties in the name of retail promotion and good cheer. Vince Camuto threw an all-girls dance party at The A-List in Beverly Hills Tuesday night to celebrate shiny shoes and bags that was attended by Kate Upton, Emily Ratajkowski, Haim, Sara and Erin Foster, Selma Blair, Busy Philipps, Nathalie Love and a host of other PYTs.

“I wanted to gather a fun, young crowd to just come and dance,” said The A-List owner Ashlee Margolis. “It’s all about the amber lighting.” The Camuto brand has continued to permeate through Hollywood seeding events like this one, where actresses and influencers don’t think twice about slipping on a stiletto to mingle with friends and take photos.

As DJ Kitty Cash spun tunes in the alley (she still had on the Dior dress she wore to an earlier party for Lady Art), Este and Alana Haim busted a move and encouraged others to join in. “The Get Down” star Shameik Moore wasn’t shy (he followed Cash from the previous event), but music comes naturally to him; he’s releasing his first record next year.

On the back terrace, guests nibbled on Christmas cookies and vamped in a neon Plexiglass portrait studio constructed by Carlos Eric Lopez, a former Teen Vogue staffer who left publishing to pursue a graduate degree in photography. “I’ve had years to practice on all my friends,” he said as he snapped away. Indeed, one of his first “test shoots” was at the wedding of Nicky Hilton and James Rothschild at Kensington Palace in 2015.