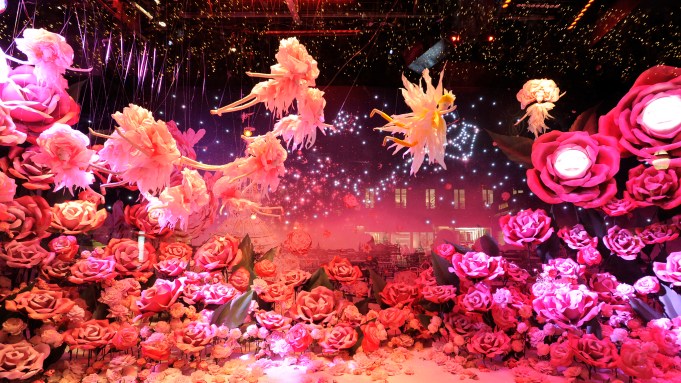 CLIMATE CHANGE: Printemps delivered on its promise to bring a little spring into winter with its Christmas window displays.

“When I saw Kate, I told her, ‘Did you bring the London weather with you?’ And she said, ‘Yes, it was raining in London.’ It’s unfortunate, but it created a bit of a romantic atmosphere,” de Cesare confided afterward.

For its holiday campaign, Printemps — which celebrates its 150th anniversary this year — broke with its recent tradition of partnering with a single luxury brand by enlisting six major names: Lancôme, Longines, Burberry, Christian Louboutin, Sonia Rykiel and Evian. Winslet is also an ambassador for Longines timepieces.

The brands worked with Decouflé to bring to life a story centered on the Printemps Fairy, which has the power to conjure spring in the middle of winter, via window displays filled with flowers and a light show on the facade of the store.

“A window display is like a little theater,” the choreographer explained. “Curiously, we worked almost as if they were nine little shows.”

Decouflé said he was leaving for New York straight after the holidays to begin rehearsals on “Paramour,” a Broadway show produced by Cirque du Soleil that he is directing. “I have been passionate about musicals since I was a child and this is my opportunity to do a big musical, so I’m thrilled,” he said.

De Cesare was upbeat about prospects for the holiday season, noting that European economic indicators are improving, tourist flows remain strong and the store’s 150th anniversary celebrations have resonated well with consumers.

“I think we can expect some good growth. At the same time, I see our initiatives are working very well,” he said.

The new Printemps department store in the Polygone Riviera shopping center in Cagnes-sur-Mer on the French Riviera, which opened last month, enjoyed an “outstanding” start and the retailer’s e-commerce business with Place des Tendances is growing 15-20 percent per month, de Cesare said.

Printemps posted double-digit growth in the last six months and sales are forecast to increase 8-9 percent to around 1.8 billion euros, or $1.9 billion at current exchange, in the fiscal year ending March 31, 2016. This compares with a rise of 6.9 percent in fiscal 2014-2015.

It has opened a pop-up toy store across the street from its Boulevard Haussmann flagship in collaboration with specialist retailer La Grande Récré.

In what appeared like a dig at neighboring Galeries Lafayette, which staged a “Star Wars”-themed street display to inaugurate its holiday campaign, the windows of the Printemps Jouet store display life-sized figures of R2-D2 and C-3PO from a private collection.