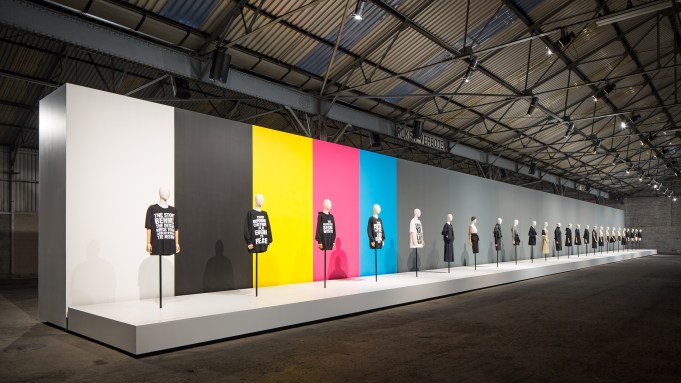 Belgian designer Bruno Pieters copped Hamnett’s pioneering efforts to raise social consciousness through clothes and displays five new statements in “Behind the Clothes,” an exhibition that just opened in a sprawling shipping hangar in Antwerp’s port district. Part of the Born in Antwerp festival spotlighting local creative businesses, the showcase is meant to highlight how fashion can promote high ethical standards.

Among Pieter’s slogans: “The Revolution Begins with You” and “Every Informed Customer Is an Engine for Peace.”

The designer also devotes a section of the exhibition to his fashion company, Honest By, which he founded in 2012 after designing a signature collection and working for Hugo Boss and Delvaux. Honest By aims to produce and sell fashions that are sustainable and priced in a transparent way, disclosing the markup, too.

Yet in Pieter’s estimation, “production processes are barely evolving at all” despite innumerable summits about sustainability. For the exhibit, he remade with ethical fabrics versions of coats, skirts and jackets that he had paraded on the Paris runways between 2001 and 2009.

The free exhibit runs through July 31.