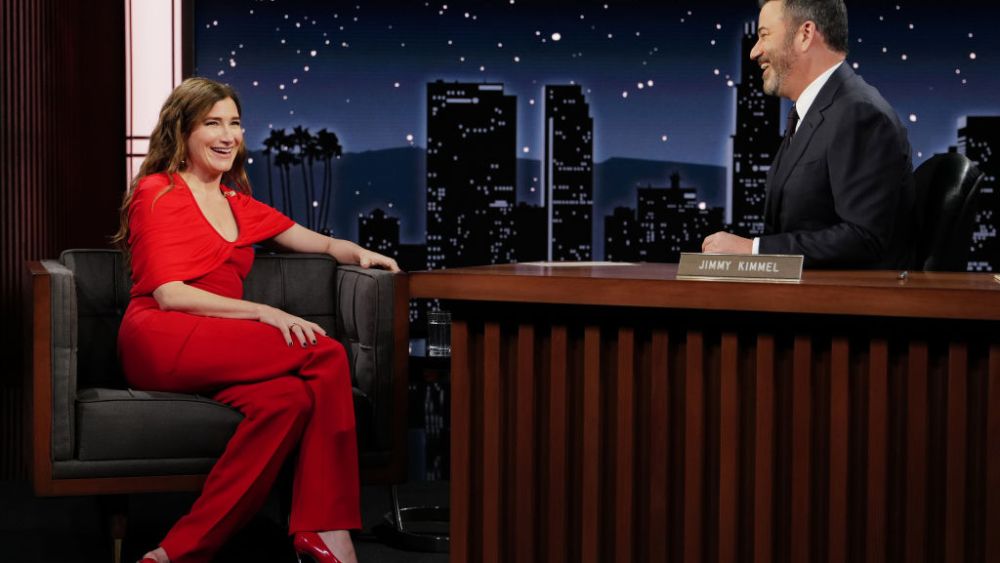 For her television appearance promoting her new Netflix movie, “Glass Onion: A Knives Out Mystery,” Hahn wore a red jumpsuit with a capelet-style shoulder, bodice detailing and a plunging neckline from the Et Ochs resort 2023 collection, which was inspired by the classic ‘90s cartoon “Rugrats.”

She coordinated the jumpsuit with a pair of candy-red heels from Casadei.

To create her look, Hahn worked with her go-to stylist, Jordan Johnson. The stylist has dressed Hahn for her ongoing press tour in brands including Carolina Herrera, Rodarte and AZ Factory. Johnson also works with Kiernan Shipka, Michelle Yeoh and Sandra Oh.

For makeup, Hahn went for a matte lip, a hint of blush and light mascara. Her hair was parted down the center and done in a wavy style.

In addition to her role in “Glass Onion: A Knives Out Mystery,” Hahn is also setting the internet ablaze as casting confirmations are announced for her planned Marvel Studios project “Agatha: Coven of Chaos,” which is expected to premiere next year.

The series will star Hahn as the title character, Agatha Harkness, who gained popularity as a character in “WandaVision,” which garnered Hahn an Emmy nomination. So far, “Agatha: Coven of Chaos” has cast Emma Caulfield, Joe Locke, Sasheer Zamata, Maria Drizzia and Ali Ahn, with Caulfield confirmed to play the character Sarah Proctor.

“Glass Onion: A Knives Out Mystery” is the sequel to the 2019 film “Knives Out.” In addition to Hahn, the film also stars Madelyn Cline, Daniel Craig, Jessica Henwick, Kate Hudson, Ethan Hawke, Janelle Monáe and Edward Norton. The movie had a limited theatrical release on Nov. 23 and will debut for streaming on Netflix on Dec. 23.