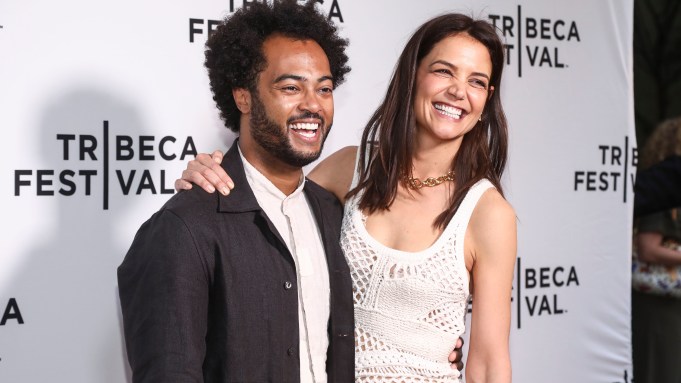 Katie Holmes looked to Chloé to debut her new film “Alone Together.”

The actress and director wore a matching hand-crocheted Chloé white tank top and long flared skirt from the design house’s pre-fall 2022 collection for the film’s premiere Tuesday night at the Tribeca Film Festival. According to Chloé, the matching set took 180 hours to create. Holmes paired the look with the Chloé Kattie bag in a soft tan color.

Holmes posed on the red carpet with her boyfriend, musician Bobby Wooten III. The couple previously made their red carpet debut last month at the Moth Ball’s 25th anniversary gala in New York City. She was also joined on the red carpet by the film’s cast, including Jim Sturgess and Derek Luke.

“Alone Together” is Holmes’ second time directing a film. She made her directorial debut in 2016 with “All We Had,” which she also starred in.

Over the last few years, Holmes has become a style star to watch in her own right, particularly for her casual, street style looks. Holmes’ most viral look came in August 2019 when the actress stepped out in New York City wearing a Khaite cashmere cardigan worn loosely over a matching cashmere bra. The style moment ultimately inspired an array of similar looks to pop up during the subsequent fashion week.

“Alone Together” will release in select theaters on July 22.