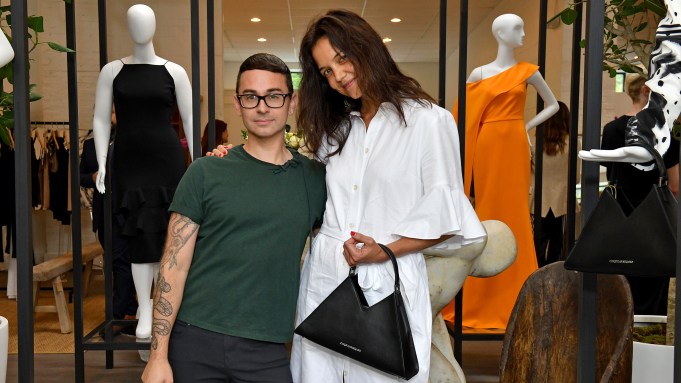 The actress attended the opening party Tuesday night at the fashion designer’s new retail concept, called The Collective West, in Westport, Connecticut. For the event, Holmes wore a simple white shirtdress paired with a black bag and white and black strappy sandals. Holmes was joined at the event by stars such as Debra Messing, Coco Rocha and Laura Linney.

Siriano, a Westport resident, hosted his spring 2021 ready-to-wear runway show at his home in September 2020.

Holmes regularly supports Siriano on his many projects. The actress attended the designer’s spring 2022 rtw runway show in September sitting in the front row alongside Alicia Silverstone, Kristin Chenoweth and others. Holmes wore a black-and-silver checkered suit for the runway show.

The actress is known for her simple, elegant style. Most recently, Holmes attended the premiere for her film “Alone Together” during the Tribeca Film Festival alongside boyfriend Bobby Wooten 3rd wearing a hand-crocheted Chloé white tank top and matching skirt from the design house’s pre-fall 2022 collection.

“Alone Together” was Holmes’ second time directing a film. She made her directorial debut in 2016 with “All We Had.”