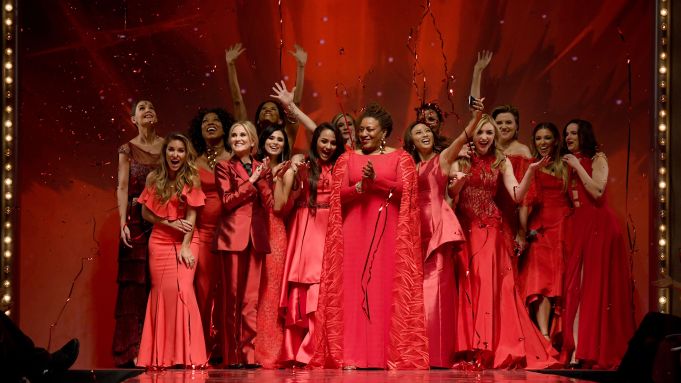 Olympian Laurie Hernandez’s mother wouldn’t let her go through the gymnastics of trekking through a snowstorm to model in Thursday’s Red Dress fashion show, but the predominantly nonteenage talent made it as planned.

By the time the event’s host, Katie Holmes, arrived at Hammerstein Ballroom, actresses like Bonnie Somerville, Lucy Lawless, Peyton List and Lauren Holly were busy backstage with last-minute makeup touches. As “The Real” cohost Jeannie Mai warmly greeted a hanger-on, “The Brady Bunch’s” Maureen McCormick had more to tend to, hobbling by on a broken heel. More collected were three who know how to work a crowd, Veronica Webb, Rachel Platten and Star Jones. Several of the celebrity models circled by Macy’s chairman and chief executive officer Terry J. Lundgren, since The American Heart Association’s Go Red for Women Red Dress Collection is presented by Macy’s.

Wearing a ruby red fringed and bejeweled Marchesa dress designed by her friend Georgina Chapman, Holmes’ work schedule is busy as ever. Along with the upcoming Reelz miniseries “The Kennedys: After Camelot,” Holmes will appear in Steven Soderbergh’s “Logan Lucky” and “Coup D’etat” with Michael Caine (which may premiere at the Tribeca Film Festival). Mention of the upcoming auction of Jackie Kennedy’s personal letters to her former paramour David Ormsby Gore made Holmes wonder, “Why do they have to release them? That’s very heartbreaking.”

Holmes is at work on her own take on “Rare Objects,” as in adapting a screenplay based on the book of that title by Kathleen Tessaro. The actress will also direct and star in the film. With her daughter Suri now 10, Holmes said, “I work a lot between 8:30 and 3. You know, you just figure it out. I don’t travel that much during the school year and then during the summer we’re together. Luckily, I have a wonderful job that allows me to do both.”

Even with those assignments, Holmes, who created the Holmes & Yang label a few years ago, is game for another design venture. “I would love to do a capsule collection.” she said.

Platten was also doing double duty Thursday night, as a model and the event’s performer. While models found their way to the elevator for the start of the main-floor show, Patten followed suit, warming up her vocal chords with the help of an assistant who not only parted the crowd but extended an iPhone so the musician could FaceTime with her voice coach. After getting more than a few curious looks for plugging her ears and warbling as she walked, the singer asked, “Is there somewhere quieter we can do this?” Before she capped off the show with “Fight Song,” Patten walked the runway in a Pamella Roland gown and later donned a Cristina Ottaviano gown for her performance. Once she is back in Los Angeles, she will return to the studio to work on new material.

Before the show got under way, Lundgren said, “We’re excited to be here after 14 years. We’ve raised $60 million but as far as we’re concerned, there is no target until we’ve eradicated the heart disease issue for women.”

He was less effusive about another matter that has been raising some c-suite retail executives’ heart rates. Asked where things stand with the Ivanka Trump brand and whether Macy’s will continue to carry it, Lundgren said, “I have no comment.” and promptly sat down.

Before the lights went down, Somerville alluded to another matter that has been in the news. In New York shooting “Law & Order,” she said she’s playing a news reporter who is a victim of sexual assault by an executive who has history of such acts. “It’s kind of a Meghan Kelly-esque role,” she said. Asked if the episode is Roger Ailes-inspired, Somerville said, “Possibly, they’re always inspired by something.”