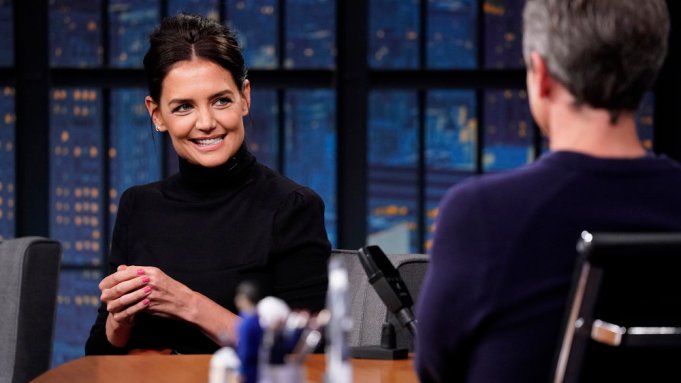 Katie Holmes had an elegant style moment during her appearance on “Late Night With Seth Meyers.”

The actress appeared on the late night show on Wednesday wearing a look from Chloé, which consisted of a black turtleneck paired with a multicolored leather skirt. She finished the look with black pumps.

Holmes’ appearance was to promote her new film, “Alone Together,” which she starred in and directed. The film tells the story of two strangers who double-book the same rental house at the start of the COVID-19 pandemic.

“We shot a year after lockdown and the movie takes place during lockdown,” Holmes explained. “As actors, I think we all went through that moment of, are we ever going to work again? Are we ever going to be on set again? So, it was more about, oh my God, there’s tape, there’s a mark, we have lines. Wow we can do it again. So, it actually never gets easier, there’s always something to figure out. But it was definitely like thank you God for every moment.”

Holmes also talked about how she wrote the film at the beginning of the pandemic and what her creative process was like.

“I went through watching a bunch of movies and actually during that time I was watching movies that I grew up on, like ‘Manhattan,’ ‘Annie Hall,’ ‘When Harry Met Sally,’” she said. “Like movies that I knew the ending [of], it was comforting, there was joy and so I thought well, I was reading a lot about couples coming together and falling apart and I was like, I think the threat of the world ending, let’s see a couple come together.”

“Alone Together” will hit theaters on Friday.