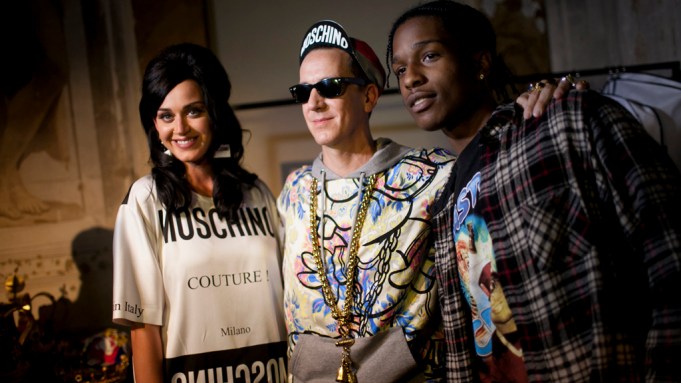 NOT FROM THIS WORLD: Motorcross and Nascar meets Casonova, is how Katy Perry summed up Jeremy Scott’s debut men’s show for Moschino. “He always fuses the most opposite worlds together and makes it look like they were born in the same place,” said Perry, fresh off the shoot of Madonna’s new video “B—- I’m Madonna,” where she appears opposite a strong cast of ladies, including Beyoncé, Nicki Minaj, Miley Cyrus and Rita Ora. “Oh, I just did a little cameo as one of a few other women,” she said humbly. “And I actually haven’t seen it yet, but I’m gonna go and watch it now.”

A$AP Rocky, meanwhile, took in the show through the lens of his newly acquired Bolex. “It’s an old camera or whatever,” he said nonchalantly of the iconic vintage item. “There is no sound, but it’s in color. It’s pretty. It’s all for my personal use,” the rapper said, filming photographers backstage at the show while they were shooting him. A duel of technologies, so to speak.