Bringing together music, fashion and beauty, the event will also feature appearances by Hailey Bieber and stylists Maeve Reilly and Karla Welch.

The digital event, which will also feature appearances by model Hailey Bieber, internet personality Lele Pons and actresses Yara Shahidi of “Grown-ish” and Madelaine Petsch of “Riverdale,” is being held on May 9 to benefit the solidarity response fund, launched by the United Nations Foundation to support the World Health Organization and its partners UNICEF and the Coalition for Epidemic Preparedness Innovations in the fight against the coronavirus pandemic. The four-hour-long affair, hosted by TV personality Erin Lim and dancer Sheela Awe, will be streamed exclusively through the retailer’s free app at 1 p.m. PST/4 p.m. ET.

“Shein has been donating hundreds of thousands of masks globally for a couple months now,” shared exclusively George Chiao, head of business development and partnerships at Shein’s U.S. marketing agency, FMMG. The company has committed a $100,000 donation to the fund. “Given that the Shein app has sophisticated technologies to host a streaming event and that the brand has such a large audience globally, the brand decided to expand on their charitable efforts and create the Shein Together virtual event concept.” 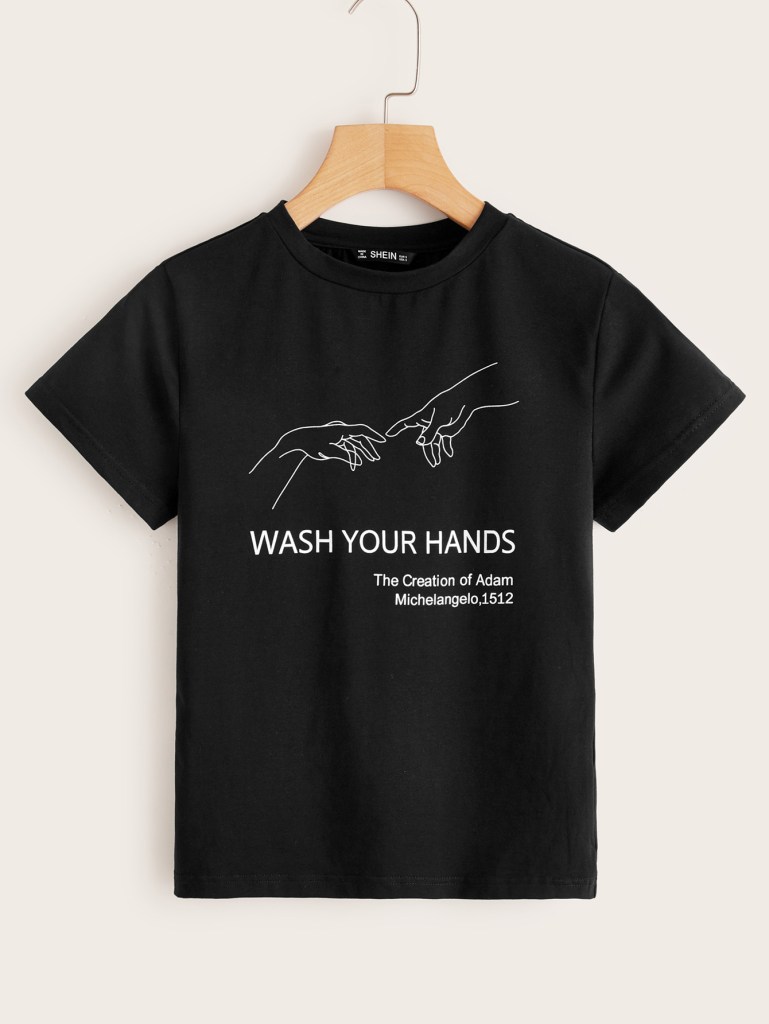 T-shirts, priced at $10, are available on shein.com with all proceeds going to the UN Foundation.  Courtesy

The lineup — which also includes YouTuber Kimberly Loaiza, “The Bachelorette” contestant Tyler Cameron and actresses Storm Reid, Vanessa Morgan and Sofia Wylie — has a combined Instagram following of more than 247 million fans (95 million of them are Perry’s).

“When Shein decided to host Shein Together, the goal was to curate a show that stands out amongst the other streams by creating content that resonates with our young audience,” continued Chiao. “Shein wanted to focus on artists and celebrities that have made significant cultural impact in their careers. The segments that viewers will see during the show will be entertaining, upbeat, interactive and educational as we wanted to bring together a group of powerful and diverse influential voices.”

Along with the performances and segments, the event promises beauty tutorials by YouTuber Chrisspy and virtual styling sessions by two major stylists: Maeve Reilly, who works closely with Bieber, and Karla Welch, whose long list of clients include actresses Tracee Ellis Ross, Sarah Paulson and Kaitlyn Dever.

“As a global brand, we know this crisis has affected all of our communities, consumers and their families, and we couldn’t stand by and not help,” shared Shein cofounder Molly Miao in a statement. “In addition to our efforts in donating masks to those on the frontlines internationally, we wanted to also make sure our audience understands the importance of supporting this cause…”

T-shirts, sold now for $10 on shein.com, are available for purchase with all of the proceeds going to the UN Foundation until May 11. Viewers will also be able to donate to the cause through a donation link on the app.