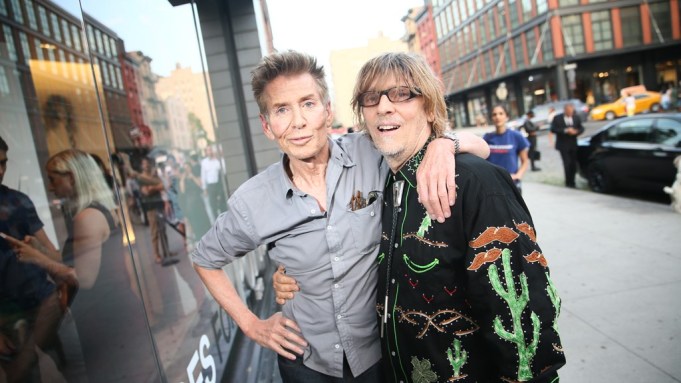 CALVIN PICTURE PERFECT: Looking lean in slim dark jeans, Calvin Klein kept a low profile Thursday night at Ports 1961’s Meatpacking District store to ensure the guest of honor Christopher Makos was the only one in the spotlight.

The pair met decades ago in the Hamptons, when Andy Warhol brought Makos with him to Klein’s house, and have been comrades ever since, Klein said, “We’re great friends and he’s so talented. I just want to be supportive and as supportive I can.”

So much so that he didn’t want to discuss any new artists, photographers or designers he has observed. “I’d rather talk about him and tell you how much I think people don’t pay enough attention to his work,” Klein said.

And with that, Makos appeared on the sidewalk for a private tete-a-tete with Klein. They weren’t the only style-minded partygoers. Among them, this year’s CFDA host John Waters, who had a repeat performance planned for uptown. His retrospective “50 Years of John Waters: How Much Can You Take?” bowed Friday at the Film Society of Lincoln Center.

Meanwhile, Cameron Silver, Lorenzo Martone and other Ports guests tuned into singer Katy Tiz’ performance in a glass box while admiring Makos’ photos of Halston and others. Some sprang for the T-shirt, bomber jacket and other items imprinted with the lensman’s work. Ports will take his “Altered States” exhibition and special edition Makos-imprinted sportswear to London, Paris, Seoul, Shanghai and Hong Kong.