The nearly 10,000-square-foot, three-story store is the brand’s largest women’s unit in the world. 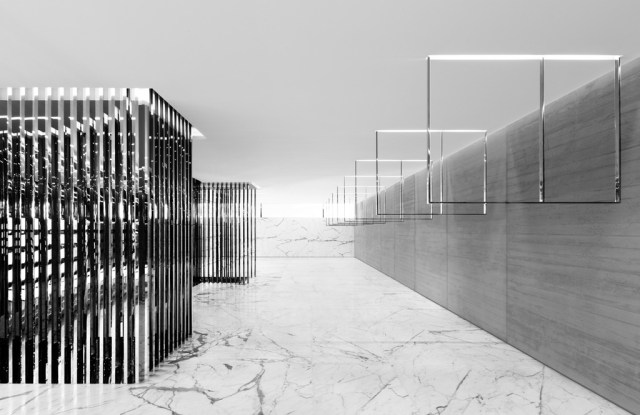 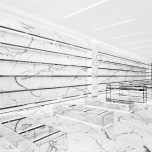 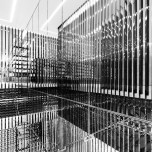 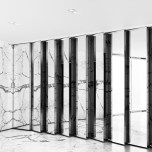 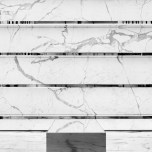 KEEPING CONTROL: Saint Laurent’s Hedi Slimane has unveiled women’s and men’s boutiques in L.A., with the women’s store at 326 North Rodeo Drive representing the house’s new retail concept. But don’t expect him to talk much about it — or to allow press to photograph it. Saint Laurent issued only four black-and-white photos and declined requests to allow WWD to shoot the store.

The nearly 10,000-square-foot, three-story store is the brand’s largest women’s unit in the world. An Art Deco mix of bright-white interior and exterior walls, gray-veined white marble, polished brass fixtures and board-formed concrete floors, the space is dominated by a metal staircase on the street level, as well as shiny shelves along the left-hand wall that stock accessories five-levels high. There are more shiny vitrines in the center of the floor containing jewelry and small leather goods, while ready-to-wear hangs on floating bars on the right-hand side. The second-floor space featuring ready-to-wear and shoes is more intimate but has an open feel because of a large plate-glass window letting in lots of sunlight. The third floor is a private dressing salon.

This story first appeared in the September 17, 2014 issue of WWD. Subscribe Today.

Vintage furniture is used throughout, including works by Louis Sognot, Jean Royère, Paul Dupré-Lafon, René Prou, Jacques Adnet and Edgar Brandt. There are African art pieces by the Ashanti, Nupe, M’Bole as well as Zimbabwe stools and a Senoufo sculpture. The Saint Laurent store located at 469 North Rodeo Drive, which had been operating as the brand’s temporary unit, now carries the men’s collections only.