“The Tourist” may have been slammed by the critics, but at least Angelina Jolie and Johnny Depp stay dry and warm thanks to Belstaff. 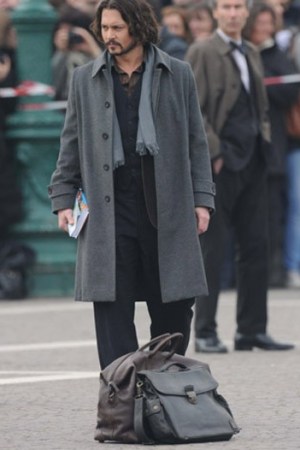 KEEPING DRY FROM THOSE REVIEWS: “The Tourist” may have been slammed by the critics, but at least Angelina Jolie and Johnny Depp stay dry and warm thanks to Belstaff. The Italian company is an old hand at costuming movies — most recently having created the Harry Jacket for Daniel Radcliffe in “Harry Potter and the Deathly Hallows.” In “The Tourist,” Jolie wears the Tourist Parka, a shiny, waterproof hooded jacket that will be available at retail next spring at 500 euros, or $661 at current exchange. The military-inspired Peacoat and the leather Office Bag are already in stores for those who are itching to look like American tourist Frank, played by Depp.

IT’S ALL GOOD: Despite hosting its usual heavy-hitting crowd, all eyes were on Kirsten Dunst at Michael’s last week at a lunch celebrating her performance in Andrew Jarecki’s latest film “All Good Things.” Based on the true story of a famed New York real estate scion (played by Ryan Gosling) who is suspected of killing his less-privileged wife (Dunst), the movie has garnered plenty of Oscar discussion for Dunst’s dark, broken portrayal of a young woman trapped in an abusive and frightening marriage.

“Kirsten was somebody we’d been thinking about from the very beginning of the script,” said Jarecki, addressing a crowd that included Dunst’s co-star in the film, Lily Rabe. “Thank god she’s a normal person. Thank god she didn’t have some Hollywood dentist fix her cute little teeth.”

For her part, Dunst, looking demure in a Celine necktie blouse, Dolce & Gabbana wool skirt and Nina Ricci fringed heels, was quick to point out that, though the part marks her most mature turn to date, it’s been a natural progression. “I’m 28, so obviously the roles are going to get older. I couldn’t play a 30-year-old at 25. I think the one thing about my career is I’ve always played pretty much age appropriate. There also are not that many roles for women who are 28 going through, like, major struggles in their life because hopefully at 28 you’re not going through that. I definitely think it’s a big change from the last films I’ve done,” said Dunst, who has a heavy upcoming lineup, including Lars von Trier’s “Melancholia” and “On the Road.” It can clearly take its toll. “I’m dying to play comedy. I’d like a big ensemble movie, no pressure, good popcorn flick — just fun. A female cast and it takes place in Hawaii. I can’t watch myself break down anymore and cry in films.”

STELLA’S NEW APP: Stella McCartney is joining the app crowd. Today, the designer launches an iPad application that customers can download for free via Apple’s iTunes store. The app allows customers a peek behind the scenes of the designer’s world — among its features are a news section that shows backstage pictures from McCartney’s summer 2011 show in Paris, and a “Stella’s Diary” section that chronicles the day of McCartney’s spring 2011 presentation in New York, along with an animated Polaroid collage of the day by artist Jeremy Kost.

There’s also film content, such as a video directed by Alastair McLellan called “In the Park,” which features Dree Hemingway wearing looks from McCartney’s winter 2010 collection. The app doesn’t currently offer e-commerce, but the label plans to add that in the future, a spokesman said. To mark the app’s launch, McCartney has designed a Falabella iPad case, in black fake leather with a chain trim, priced at $395. The next issue of the app will launch in the spring.

GOING NATIVE, IN YSL: Arabian white cotton robes by Yves Saint Laurent? That, plus a headpiece by Givenchy and YSL alligator sandals, was the garb worn by hairstylist Cerón on his recent visit to the United Arab Emirates. “It’s the most comfortable thing ever,” said Cerón, at a party Wednesday for artist Elizabeth Moore at his salon at Neiman Marcus’ Dallas flagship. “The underwear is like a skirt…and the headpiece — they do them up or down like hair.” Cerón, whose primary business is in Houston, was especially enamored with the Emirates Palace Hotel in Abu Dhabi. “You can have anything you want. A pedicure at 3 a.m.? Done.” Cerón bought the two-week trip for four for $30,000 during a UNICEF benefit at the home of Houston fund-raising powerhouse Becca Cason Thrash. Cerón traveled with his partner, Mark Sullivan; Mark’s mother, Jeanne Sullivan, and Diane Farb.

FREEZE FRAME: The title of lensman James Hamilton’s new book — “You Should Have Heard Just What I Seen” — could have applied to Wes Anderson and Thurston Moore Tuesday night. They were meant to host a party in Hamilton’s honor but never quite made it to the Royalton. But revelers such as Waris Ahluwalia, Elisabeth Biondi, Mark Holgate and Shamim Momin and the guest of honor carried on just the same. In keeping with Hamilton’s all-access ways, guests entered Forty Four via the back door. Ecstatic Peace Library published the tome.

As a few guests leafed through the images of Madonna, The Beastie Boys, Run-DMC and other rockers, Hamilton singled out the shot of Jerry Lee Lewis as a blue-ribbon one. “It was taken in his dressing room right after he had thrown a knife at me. He was playing at a club on the Upper East Side, and afterwards, I went back to his dressing room and he was completely drunk and had been all through the show. But he had done that so many times it didn’t matter. He started to get out of his trousers, I was sitting down [getting my equipment together] and all of a sudden I felt a knife go flying by one of my ears. When I looked up, he was laughing uproariously and then I commenced to take his picture.”

Truth be told, Hamilton has taken a truckload of pictures throughout his career. Having collaborated with Anderson on several of his films (though not the upcoming one, “Moonrise Kingdom”), Hamilton is now piecing together another photography book with him of filmmakers. Alfred Hitchcock looks the most likely one to land the cover, with Martin Scorsese and scads of others inside.

BARING THEIR SOLES: With creative directors acting as makeshift editors on their brands’ Web sites, it was only a matter of time before more editors started calling the shots for stores. Steve Madden has recruited Paper magazine’s Mickey Boardman, Luigi Tadini, Alexis Swerdloff and Whitney Spaner to curate three of the shoe man’s Manhattan stores. They hosted parties in each Thursday. Madden’s Web site features colorful images of each hamming things up with their favorite kicks from the collection. But one of Tadini’s seems most apropos — the “Schiller.”

BOOTY CALL: As part of its “Clicquot in the Snow” winter initiative, Champagne maker Veuve Clicquot just introduced a special item with DKNY — a rubber snow boot in Veuve’s signature yellow color. The $99 limited edition item just launched at several DKNY stores and dkny.com, and already has some people excited.

“I look forward to seeing women show off their boots during après-ski as well as in the city this winter,” said Vanessa Kay, vice president of Veuve Clicquot USA. The particularly daring ones, of course, can always try to sip Champagne out of them.

ON ITS AXIS: Li Edelkoort tends to cover the waterfront with her sociologically slanted fashion trend presentations, and Wednesday’s, for summer 2012, was no exception. Tagged “Earth Matters,” she mined all sorts of useful nuggets for her standing-room-only audience at The New School. Beyond banking on shorts, stripes, oversize clothing, zippered styles and eroded patterns, the forecaster tipped them off to “the mountain girl” look that is sweeping Japan. “Girls go to school or the office wearing mountain climbing jackets and shoes with backpacks and little skirts. It is a big street trend in Tokyo. By and large it means that action sports such as mountain biking, hiking and surfing will be superinfluence fashion.”

Edelkoort also urged attendees to consider eco-friendly manufacturing alternatives such as an Aqua Farm in Japan where denim manufactures have jeans washed with sea water instead of chemically treated water. The forecaster also singled out the 72-year-old Issey Miyake, whose 1235 label encapsulates what she called “eco-tech,” a new field that consists of unlikely combos such as recycled polyester. Edelkoort was less enthused about how some of these trends trickled through Miami Art Basel. “I have never seen so much s–t and debris in one place. It was like the whole world dumped its recycling.…So you have to put fashion on sabbatical and create from waste,” she said.