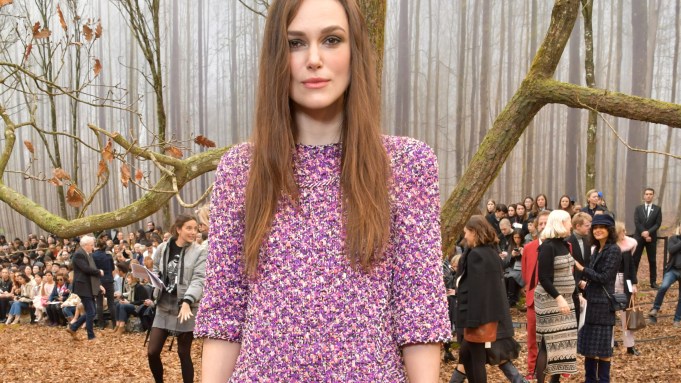 OUT OF THE WOODS: It made for a surreal fashion moment: the dressed-up-to-the-nines fashion crowd and Chanel’s VIP guests wandering through a fake forest in the Grand Palais, with a carpet of autumnal leaves and bona fide mature trees transplanted into the site for the house’s show on Tuesday.

“Apparently they’re giving the trees back, they’re only borrowed, although I secretly wanted one for my garden,” said Keira Knightley.

Kristine Froseth, who was attending her first Chanel show, certainly hadn’t expected it.

“I stepped inside and I felt like I was in the English countryside, with the smell of the leaves,” said the actress, who has four movies coming out. She’s also the female lead in “The Truth About the Harry Quebert Affair,” which will open the inaugural Cannes International Series Festival in April.

“Series are becoming so massive, it was just a question of time. It’s taking over movies,” said Froseth, who in the meantime was looking forward to doing some “Eiffel Tower touristy stuff.”

Vanessa Paradis, who spends half of her time in California “where you don’t see any change all year,” said it’s made her appreciate the seasons, “and the way the light changes,” all the more. She declined to comment on reports that she’s engaged to Samuel Benchetrit, who directed her latest film, “Dog.”

Langley Fox Hemingway was in her element. “Being in the forest is my favorite thing. I grew up in Idaho so it’s my type of paradise. They somehow got it to feel like a forest, smell like a forest….It’s beautiful,” said the artist, who was suffering from a case of “fashion flu.”

Fox said she’s working on bringing the art show she presented with a group of like-minded artists in Paris in December, titled “Nothing Serious,” to Los Angeles. “It’s a bunch of drawings that are very serious — in the first one I drew a crying child, an old circus man with needles through his face, and dead mice.”

Meanwhile, Iranian actress Golshifteh Farahani, who had accessorized her Chanel outfit with jewelry by Goldish, said she has a zombie movie coming out — “The Night Eats the World” — that is probably going to the Tribeca Film Festival in April. “I’m one of the survivors. It’s a metaphor of our world, how we’re all becoming zombies, and to survive this thing we need to be very intelligent,” she said.

Vicky Krieps, who starred opposite Daniel Day-Lewis in “Phantom Thread,” was attending her first fashion show. “I’m just blown away by the amount of work that goes into each outfit,” she marveled. The Luxembourgish actress will be seen next in “The Girl in the Spider’s Web” with Claire Foy.

It’s back to work for Knightley, meanwhile, who on Monday will start filming “Official Secrets,” based on a true story of a British whistleblower who leaked information to the press about an illegal National Security Agency spy operation designed to push the U.N. Security Council into sanctioning the 2003 invasion of Iraq.

“It was released four days before we actually went to war so it kind of got completely lost in the invasion itself, but it’s an interesting story about government accountability and what we want from our intelligence services,” said Knightley. “It’s definitely not a comedy.”