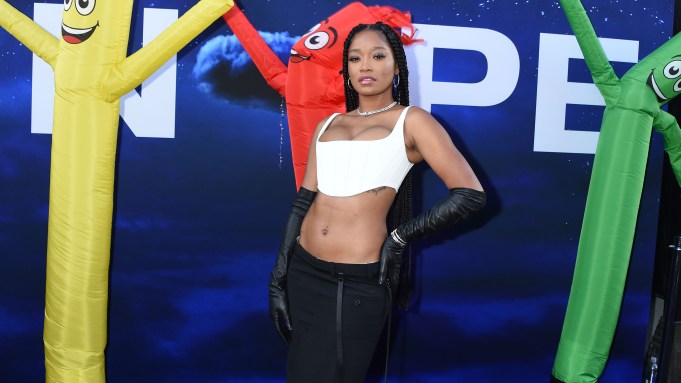 Keke Palmer went with an edgy look to celebrate her upcoming film, “Nope.”

Palmer, who stars in the film, was joined on the red carpet by costars Daniel Kaluuya, Steven Yeun and Brandon Perea as well as the film’s director, Jordan Peele. The film’s premiere also drew in several other celebrities, including Lupita Nyong’o, Kelly Rowland, John Boyega, Michael B. Jordan and others.

“I’m not a secret holder, so the fact that I have this big thing that I’ve been holding and no one knows and I can’t really share, it gives me anxiety,” she said. “So the fact that I can finally just be like ‘Y’all know!’”

This is Palmer’s latest film to debut this summer. The actress also starred on Pixar’s “Lightyear,” an animated film that told the origin story of “Toy Story” character Buzz Lightyear. For the film’s London premiere, Palmer chose an elegant 16Arlington feathered white dress.