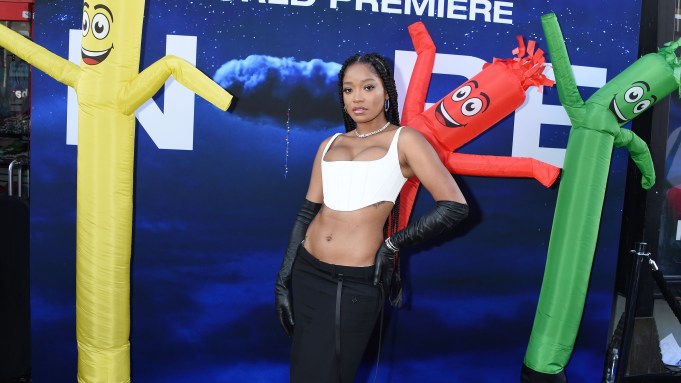 Keke Palmer has had a breakout style moment during the press tour for “Nope.”

The actress has attended multiple premieres and late night talk shows to promote the horror film directed by Jordan Peele, wearing an array of standout, edgy looks from major designer labels. Palmer has been working with her styling team, styling duo Wayman Deon and Micah McDonald, for the press tour.

Palmer kicked off the press tour at the “Nope” world premiere in Los Angeles wearing an edgy look from Marc Jacobs’ recent fall 2022 ready-to-wear collection. The look consisted of a cropped white bandeau top paired with a black, low-rise maxiskirt, which she paired with black leather opera gloves.

The actress later appeared on “The Tonight Show Starring Jimmy Fallon” the following day, keeping up the edgy theme in a look by Prada. Palmer’s outfit was a white tank top and black high-rise shorts worn under a mesh dress with bead embellishments.

Palmer also appeared on “Late Night With Seth Meyers” with the “Nope” cast and Peele, where she stood out in a neon orange blazer jacket worn over a bright pink look.