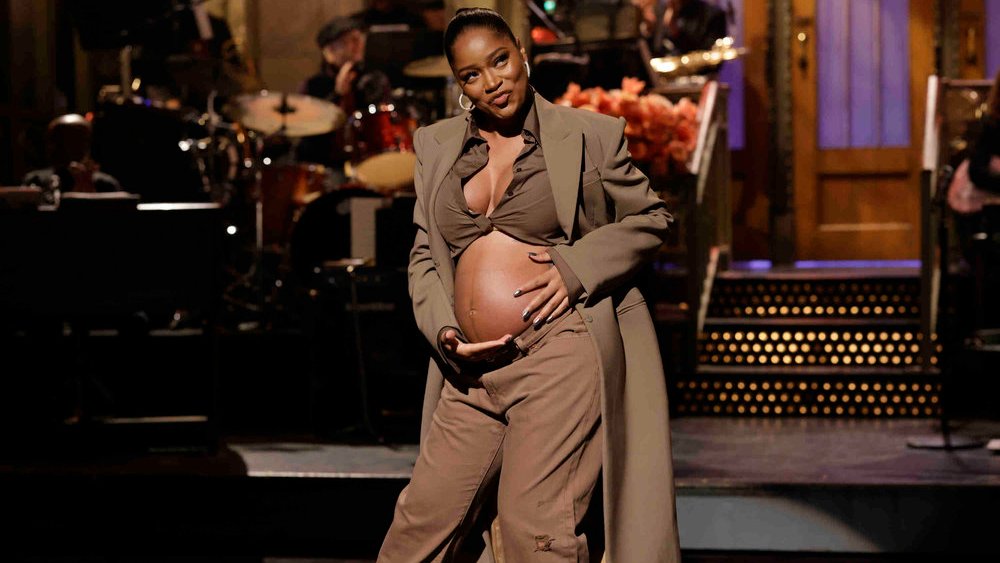 Keke Palmer made her debut as “Saturday Night Live” host over the weekend, while also sharing big news with her fans.

The actress and producer hosted the show for the first time, wearing a Sportmax three-piece ensemble for her monologue number. The outfit featured a long brown trench coat, a pair of brown cargo pants and a brown cropped fitted blouse.

While hosting the show, Palmer opened up about her career as a child actor, talked about upcoming projects, and jokingly asked fans to stop hounding her about pregnancy rumors. Surprisingly, she confirmed the rumors, opening her oversized trench coat to reveal her growing baby bump.

For her hosting debut, Palmer looked to the celebrity stylist duo Wayman and Micah. The pair have also outfitted Tessa Thompson, Jodie Turner-Smith and Stephanie Hsu. To coordinate Palmer’s brown-themed look, she wore a pair of Paris Texas ankle boots in taupe.

For accessories, she donned jewelry from Mimi So New York and Graziela Gems. Her hair was styled in a high-braided ponytail. Palmer opted for a TV-ready makeup look, with glowy skin, defined lashes and a glossy brown lip.

For the ending scene of the episode, Palmer looked to June Ambrose and Puma’s co-collaborative collection, “Keeping Score.” The actress wore a three-piece set from the upcoming collection with Puma and its creative director, set to release in early 2023.

The outfit consisted of a cropped pinstripe patterned jacket with a burgundy accent, a purple crop top with a matching burgundy design and a matching low-rise drawstring maxi skirt. Standing with Natasha Lyonne and SZA, Palmer wore her long black hair with a full front bang.

Palmer has wowed many with her standout fashion looks. While arriving at the CFDA Fashion Awards in November, she looked to Carolina Herrera’s spring 2023 collection, wearing an off-the-shoulder floral printed gown with puff sleeves. While hosting the Wearable Art Gala in October, she channeled the 1920s era in a vintage Yves Saint Laurent black dress adorned with feathers on the chest.