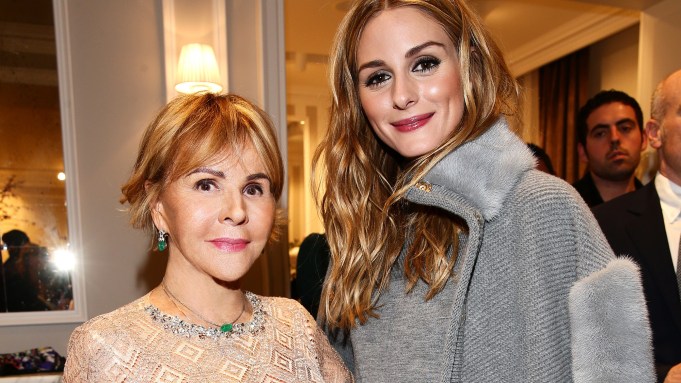 ON THE AVENUE: Kelly Rowland, Olivia Palermo and Loan Chabanol were among the guests who attended the cocktail Saturday night hosted by Blumarine, which unveiled a new look for its first French flagship, on Avenue Montaigne, whose surface was doubled to 3,300 square feet.

“We finished it this morning,” said Anna Molinari, who cofounded the Italian label with her husband in 1977. “It’s like an apartment, where you can feel comfortable.”

She was leaning on a fireplace in the newly added first floor. Molinari divulged the label has more openings in the pipeline this year, including in Nice, France; Shanghai, and Monte Carlo. “They’re based on the new concept,” she said.

Chabanol was sporting a Blumarine outfit. “It’s a bit rock,” she said. “I love transparency and lace.”

The actress, who recently fronted a L’Oréal Professionnel ad and played the main female role in Luc Besson’s “The Transporter Refueled” is working on a new movie. “It’s a film I cowrote. The shoot will be in Vietnam — I have Vietnamese blood. It’s called ‘Siam.’ I play in it, too,” she revealed.

Chabanol is also preparing for her third painting exhibit, in an art gallery in Shanghai. “At home, I have pencils, chalk and paintings lying all around on the floor. Whenever I am in Paris, I go to museums — [Musée] Gustave Moreau, [Maison] Victor Hugo. I like intimate museums, where you immerse yourself in the universe of an artist,” she said.

Chabanol, who was on her way for dinner at Market, plans to attend the Chanel show on Tuesday.

Rowland has favorite eateries of her own in Paris, too. “Ferdi, L’Avenue and Diep — a Chinese place I have just discovered that’s so good. I am definitely a foodie,” she said with a laugh.

The singer, who has been swept up in the fashion-week whirlwind, attended the Chloé, Haider Ackermann and Lanvin shows, among others. She is heading home on Monday. “I have a 16-month son,” said Rowland. “I miss him.”

So when is her next performance? “Not for a while actually,” she said. “I am in the studio recording a new album.”