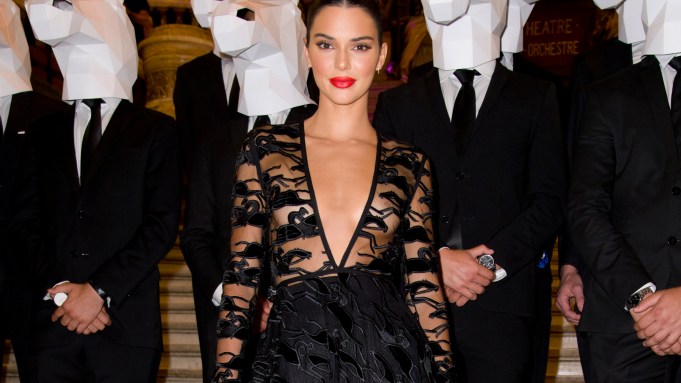 FAMILY AFFAIR: “French culture is pretty cool, and I aspire to being that cool,” said Kendall Jenner, parting the masses who had gathered to see her at Longchamp’s 70th anniversary party at Paris’ Palais Garnier opera house on Tuesday. Dressed in a dramatic black guipure lace dress with horse rider motifs, nodding to the brand’s logo, the model paused to strike a pose on the site’s grand staircase flanked by tuxedoed men with white paper horse heads. “Wow, it’s so beautiful, I’ve never been here before,” she cooed, gazing at the lavish decor.

On her achievements as a self-made woman, Jenner, who as the face of Longchamp had flown in from New York for the event, said, “It’s very easy to be lazy, but to really put hard work into something and do your best in everything you do is something I try and embody.”

On her tail was Longchamp’s creative director Sophie Delafontaine, who was still buzzing from the brand’s New York show. The plan was to do something totally different for Paris, she explained. “Tonight is all about celebrating Longchamp’s heritage and the family touch,” she said.

“The Paris opera house is such an iconic place, and for us perhaps even more because our business started with my grandparents on the Grands Boulevards, around 500 meters away, so it’s really the heart of Longchamp,” said Cassegrain, who later in the night joined his father Philippe Cassegrain to give a speech.

Guests included Guillaume Canet, Mathias Kiss, Leïla Bekhti and blissed up newlyweds Vincent Cassel and Tina Kunakey. Cassel said he is due to start filming “Hors Norme,” directed by Olivier Nakache and Éric Toledano. “I play a carer of autistic kids, and it’s supposed to be a comedy,” said the actor, adding that he has had to put his honeymoon on hold.

Taking in the dancers in the site’s main hall, actress Ana Girardot, dressed in a suede coat and matching boots, talked accessories.

“I’m definitely a bag girl: bags carry your universe, it’s a very important thing for a woman,” she said, taking a moment to reflect. “What is it Freud said? That bags are a symbol of a woman’s vagina.”