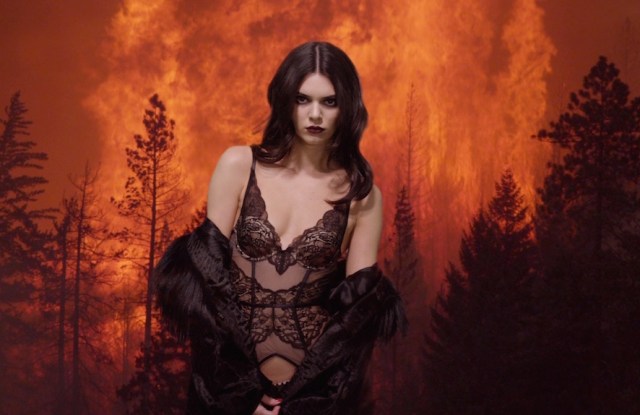 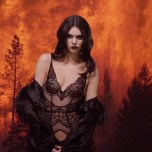 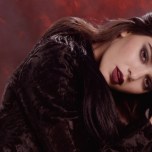 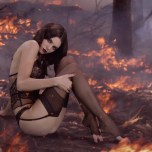 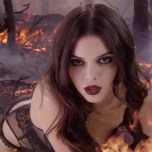 PLAYING WITH FIRE: Kendall Jenner has taken on another role for Love magazine’s advent calendar. After appearing in a shark costume to launch this year’s alternative calendar, Jenner has transformed into a goddess of the seasons for a special-effects short film that has just been released on the magazine’s site.

Director James Lima came up with the idea for the apocalyptic short film, named “YuleFire,” in a dream and thought Jenner was the ideal person to bring his vision to life.

“I saw this figure, this vision of a woman as an ancient force, elemental and mystical. She is a goddess who created the seasons, the elements and the concept of astronomical time. Kendall is the perfect person to play this character. She is beautiful, powerful, fearless and yet vulnerable,” said Lima.

The film sees Jenner crawling in the burning forest in a shearling coat and lace lingerie. When the fire reaches a climax the scene turns into snow, with Jenner changing into a white and beige chevron-striped fur coat and metallic heels.

Having previously collaborated on short films for Prada and Versace, Grand jumped at the opportunity to work with Lima again.

“Love advent has always been lo-fi and fun, and James moved it into a whole new league of green screen and massive production. I’ve loved the work we’ve done together with Prada and Versace, so to work together with Kendall was literally ‘the dream,’” said Grand.

Rita Ora re-enacting a scene of Mean Girls and singing “Jingle Bell Rock” in a Santa-inspired costume has been one of this year’s highlights.

The festive stream has had over 5.4 million views since launching on Dec. 1.