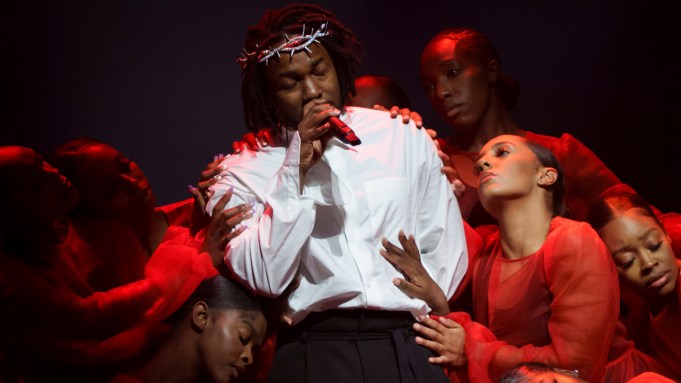 It seems Kendrick Lamar’s new favorite accessory as of late is a diamond-encrusted crown of thorns.

The crown was made by none other than Tiffany & Co., and has been worn by the rapper everywhere — from the cover of his latest album to his performance at the 2022 Glastonbury Festival. The accessory was reportedly commissioned last year by the rapper and his longtime creative collaborator, Dave Free.

This week, Ruba Abu-Nimah, the creative director at Tiffany’s, shared a closer look at the details of the intricate crown on Instagram, with details about exactly how long it took to make the piece.

The accessory was handcrafted by four artisans over the course of 10 months, taking a total of 1,300 hours to complete, Abu-Nimah wrote. Tiffany’s expert jewelers assembled the crown by putting together 16 individual pieces. Additionally, the crown has 50 thorns and is adorned with more than 8,000 diamonds.

The crown of thorns was first seen on Lamar on the cover of his newest album “Mr. Morale & the Big Steppers,” which was released in May. The photo shows the rapper carrying his two-year-old daughter while his fiancée Whitney Alford sits on a bed breastfeeding a newborn baby that appears to be the couple’s second child.

The diamond-covered wreath made another appearance when Lamar sat front row and performed at the Louis Vuitton men’s spring 2023 show last week, where he rapped his hits such as “N95” and “Rich Spirit.” He also paid tribute to the brand’s late creative director, Virgil Abloh, who died in November from cancer.

Over the weekend, the rapper headlined the final day of the popular Glastonbury Festival, wearing the crown once more. Lamar sang songs from his new album and his older hits, such as “Humble” and “Alright.” He concluded his set with “Savior,” which touches on politics, COVID-19 and the Black Lives Matter movement.

Then, like the other artists who performed at Glastonbury over the weekend, he condemned the overturning of Roe v. Wade by the Supreme Court.

“They judge you, they judge Christ. Godspeed for women’s rights,” Lamar repeated over and over again before leaving the stage.