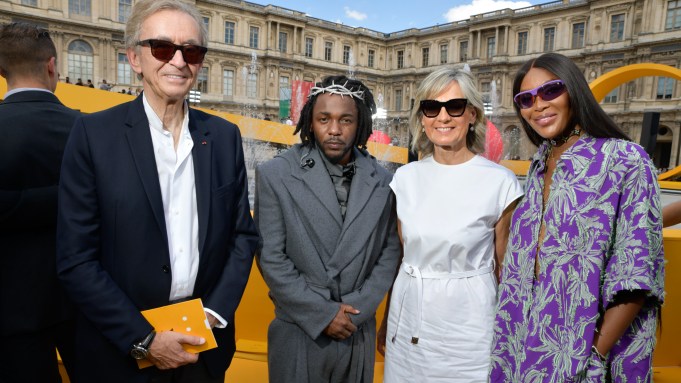 Kendrick Lamar is continuing to keep Virgil Abloh close to his heart.

On Thursday, the award-winning artist sat in the front row at the Louis Vuitton Men’s spring 2023 show in Paris as he rapped numerous songs for the show, paying tribute to Abloh, the label’s late artistic director who died from cancer in November.

Accompanied by an orchestra, Lamar sang his songs such as “Savior,” “Rich Spirit” and “Count Me Out.” He then did an outro, saying “Long live Virgil,” repeating the designer’s first name over and over again. He concluded his performance with “N95.”

For the show, the rapper wore an oversized gray suit and a crown of thorns while sitting next to his manager Dave Free and Naomi Campbell.

Lamar also paid homage to the late designer in February, when he performed as part of a star-studded lineup for the Super Bowl in Los Angeles.

The artist wore a custom Louis Vuitton look, which was a black wool double-breasted suit with jewelry buttons and a silk shirt from Abloh’s final collection for the French luxury fashion house, which was presented this past January. He accessorized with black leather gloves and black leather boots also by Louis Vuitton.

For the occasion, the rapper also wore a mix of Tiffany & Co. jewelry, including multiple diamond necklaces, earrings, and rings, as well as three patriotic clips from the Tiffany & Co. archives circa 1941 to 1951 and a Maltese Cross clip on his arm.