"Fashion Rules" is being billed as a “new take” on the story of the monarchy in the late 20th Century. 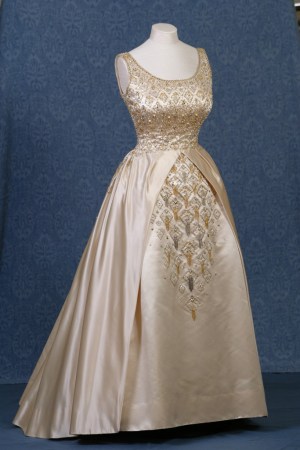 A DRESSY AFFAIR: Come July, Kensington Palace will be humming. Not only will palace denizens the Duke and Duchess of Cambridge welcome their firstborn child and the heir to the British throne, but a new exhibition involving the baby royal’s female family members is set to open on July 4. “Fashion Rules: Dress From the Collections of HM The Queen, Princess Margaret, and Diana, Princess of Wales” will go on display, in what organizers say will be a “new take” on the story of the monarchy in the late 20th Century.

Historic Royal Palaces is the independent charity that looks after national landmarks including The Tower of London and Kensington Palace. Michael Day, chief executive of Historic Royal Palaces, pointed out that the story of the dresses: “begins in the same era as when Estée Lauder founded her business.”

Curator Cassie Davies-Stodder said the show would provide a rare opportunity “to get up close to these wonderful dresses and be transported to the times in which they were worn. Elizabeth II, Princess Margaret and Diana, Princess of Wales all have a special connection with Kensington Palace, making it the perfect location to celebrate theses modern royal women in their fashion heyday.”