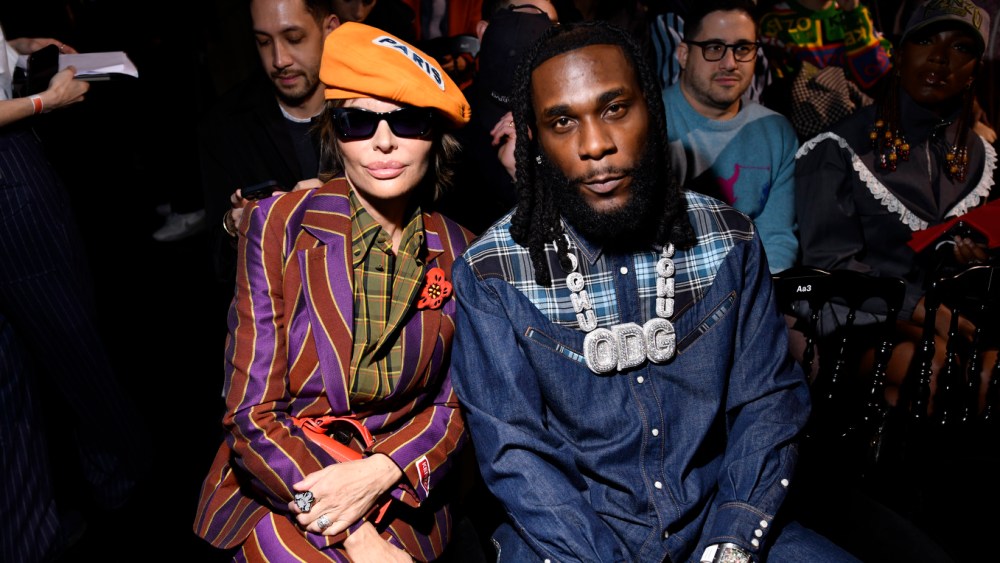 On Friday night, the tables were turned at the Salle Pleyel concert hall, with musical artists taking to their seats rather than the stage for the third chapter of Nigo’s tenure at Kenzo.

Outside, Parisian fans had given a warm welcome, screaming in delight as the likes of rappers Pusha T, Skepta, Tyga and Kodak Black, who was carrying his one-year-old daughter Queen Yuri Kapri in his arms, came in thick and fast.

Pharrell Williams also arrived with his family, posing with wife Helen Lasichanh and son Rocket in a photo-call with spinning arms that captured an aerial 360-degree video portrait.

“I love Paris — just like my home. It’s always so good to me, always, from music to art, to design to fashion, they’ve always welcomed,” he said.

The next project he’ll be sharing with the City of Light will be Sunday’s launch of the sneaker collaboration between Adidas Originals and the artist’s product company Humanrace, which will see the NMD S1 Mahbs model released at Kith.

Pop star Aya Nakamura, recently dubbed the “queen of French pop” by French newspaper Le Monde and currently the most listened to Francophone artist in the world on streaming platforms, slipped into her seat as the show was about to start. Her fourth album, titled “DNK” as a reference to her last name Danioko, is slated to drop on Friday.

Rather than the radical lyrics of any of these artists, it was the ballads of The Beatles that accompanied the fall 2023 Kenzo show, as all-female string ensemble 1966 Quartet performed live.

For former “Real Housewives of Beverly Hills” headliner Lisa Rinna, this felt like a warm-up for couture, as she revealed youngest daughter Amelia Gray would be coming to town to walk in her first couture show, though she demurred on revealing the house for fear of jinxing the project.

The actress was up for “everything and anything” now that her eight-season run on the hit reality show is over. “I’m free and I can do whatever I want — here I am in Paris at the Kenzo show,” she said with relish. “Life is an open book right now and I love that.”

While her next move is still up in the air and with Rinna Beauty gathering pace, Rinna was spotted earlier in the day shopping and sightseeing with friend and former costar Erika Jayne, who also attended the Kenzo show.

After the show, guests regrouped downstairs in the foyer for canapés and cocktails named Boke and Poppy, after the house’s signature blooms.

Expectations were high as a surprise performance had been announced. With the many heavy hitters in attendance, it was American rapper Lil Baby who took to the stage, to the delight of the crowd.

Among them was K-pop star Big Matthew, who revealed he was a big fan of the rapper as he nodded appreciatively to the lyrics of diamond-certified hit “Drip Too Hard.” The surprise concert was exactly the kind of moment he’d come to expect from fashion week.

“Paris is always a good time,” said the Korean American musician with a grin. “So much inspiration, so much creativity around. It’s a breath of fresh air.”

With a new Kard album and a rash of new solo songs in the works, he’s already thinking about what to wear for performances and public appearances. “There are a couple pieces — I took a couple videos — when they come out, they’re gonna be mine.”