The designer was made a Knight of the Legion of Honor on Thursday evening in Paris. 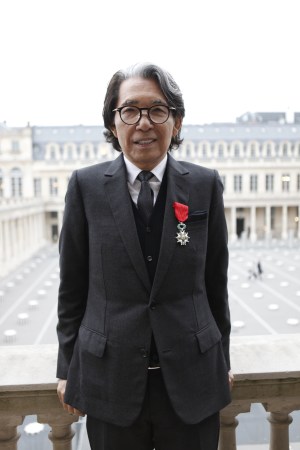 KNIGHT OF STYLE: Despite the swiftly rising waters of the river Seine, Paris remained abuzz Thursday evening, when fashion folk flocked to the Constitutional Council building, a stone’s throw from the Louvre, where Kenzo Takada was made a Knight of the Legion of Honor.

“From now on, you’ll be exclusively called a Knight,” said Laurent Fabius, president of the Constitutional Council. He paid tribute to the “impressive success story” that led a young boy from the small town of Himeji, in Japan, “to the heights of Parisian and global fashion.”

Fabius mentioned Takada’s decisive encounter with a professor at Tokyo’s Bunka Fashion College, his tour around the globe at the age of 25 that inspired his ethnic motifs before arriving in France for what was supposed to be a six-month stay.

“In 1970, you opened a small boutique on the other side of the Palais-Royal gardens — unfortunately the weather is bad, otherwise you’d see the sublime panorama from here — in the Galerie Vivienne, which is typically Parisian,” said Fabius, noting that the designer introduced a “profusion of colors and flowers” and a “mix audacity and poetry” to French fashion.

Fabius peppered his speech with countless tidbits about Takada, including glimpses of a busy nightlife in his heyday (including an “appearance in a mouse costume in a Parisian nightclub”) as well as “his perfect ineptitude for retirement.”

“France brought me a lot, in terms of friendship, opportunities and joy,” said Takada. “The day I left Japan in 1964 for Paris, I thought it was for six months. My stay is still not over more than 50 years later.”

So what can the rising generation of designers learn from Takada?

“Humility,” quipped Picart, adding: “The most difficult challenge in our field is to last.”

The executive, who recently retired from his consultancy, said: “I am very gifted at my new life. I am in a good mood.”

Back on the subject of Takada, Issermann said: “He brought a lot of fantasy to fashion. There was something childish, coming of age, in his clothes. It wasn’t a ladies’ fashion. It was provoking and sexy.”

For her part, the photographer was given carte blanche by the Aéroports de Paris for a major project at Paris-Charles de Gaulle Airport in November.

“Gilles and I met at the opening of the Kenzo boutique on Place des Victoires in October 1976,” said Commoy.

To mark their 40 years of collaboration, the duo is preparing a book to be published by Flammarion, an exhibit at the Musée d’Ixelles in Brussels and another show in Le Havre, in northern France.