Kerby Jean-Raymond on His Debt to Cross Colours: ‘I Wouldn’t Have Gone Into This Career’

The Pyer Moss designer and Reebok creative director was in conversation with Cross Colours cofounder TJ Walker as part of the Black Design Collective's annual fund-raiser on Sunday.

“Cross Colours was one of the first brands that made fashion an option for me,” Kerby Jean-Raymond told the L.A. brand’s cofounder TJ Walker on Sunday. “Had I not seen it, I wouldn’t have gone into this career because I would have never known it existed.”

The Pyer Moss designer and Reebok creative director was in conversation with Walker as part of the L.A.-based Black Design Collective’s annual fund-raiser, held virtually on Sunday night to raise funds for a new TJ Walker scholarship fund.

The nonprofit Black Design Collective was founded in 2019 by costume designer Ruth E. Carter, fashion designers Kevan Hall, Angela Dean and Walker to help Black fashion designers get into the industry by providing financial resources and mentorship, and to provide visibility to ones who are often overlooked.

“TJ and Carl are some of my heroes.…When I bought my company back in 2017, I wanted to highlight my predecessors and allow them to share a stage with me. The first brand I contacted was Cross Colours,” Jean-Raymond explained, referencing his fall 2018 Pyer Moss men’s wear collection.

The designers traded stories about being Black in fashion, shared business insights and lessons for young designers in the talk moderated by journalist Loren LoRosa.

“Carl Jones and myself didn’t know what we were doing.…We had pent-up energy we wanted to expose. We took it from the streets,” Walker said of the brand they started in 1989 with the idea of promoting racial harmony with the rallying cry “clothing without prejudice.”

“Being able to communicate through the medium of fashion started with Cross Colours,” said Jean-Raymond, who has used his work to investigate racism and overlooked Black cultural figures, like rock ‘n’ roll pioneer Sister Rosetta Tharpe.

His goal? “To get an industry with a loud voice on the world stage to help,” Jean-Raymond said, adding on the topic of progress toward racial justice. “We’re heading in the right direction.…What we did in 2015 was a conversation starter; I’m happy now it’s on the top of everyone’s priority lists.” (He brought police brutality and the Black Lives Matter movement to the runway way back in fall 2015, and received death threats because of it.)

“Our clothes were banned in some schools; they twisted it and said we were promoting gang violence, which was the opposite of what we were doing which was promoting non-violence,” Walker shared of Cross Colours’ experience. “But youth are interesting, that made them gravitate to it more. In this go around, I like seeing what’s happening and all the youth at protests, and how diverse they are. I try to look at it as not being a trend; it needs to be something that stays with us, that we dwell on that becomes our lifestyle and everyone’s lifestyle.”

Speaking to young designers specifically, Jean-Raymond cautioned them to be wary of taking on investment, explaining that he still pays royalties on a $25,000 loan he took several years ago. “Ask yourself, ‘Have I exhausted all opportunities to make this money?’…If you are 90 percent there, you probably haven’t.”

“What’s different now from then is you don’t need brick-and-mortar, and you can outsource most things you need to do, like shipping and distribution,” said Walker, who with Jones was forced to close Cross Colours in the Nineties after a series of financial challenges, including the bankruptcy of retailer Merry Go Round. After celebrating its 40th anniversary last year with an exhibition at the California African American Museum, Cross Colours relaunched online with its signature color-blocked sportswear and T-shirts with slogans such as “No Justice No Peace” and “Stop the Violence.”

On the subject of business success, Jean-Raymond said, “This is the first year our organization behind the scenes has caught up to the press; prior to that, it was just trying to live up to the name.”

Both men agreed that to succeed in fashion, your work must be your life’s love. “The passion will keep you going when the money runs out,” Walker said. 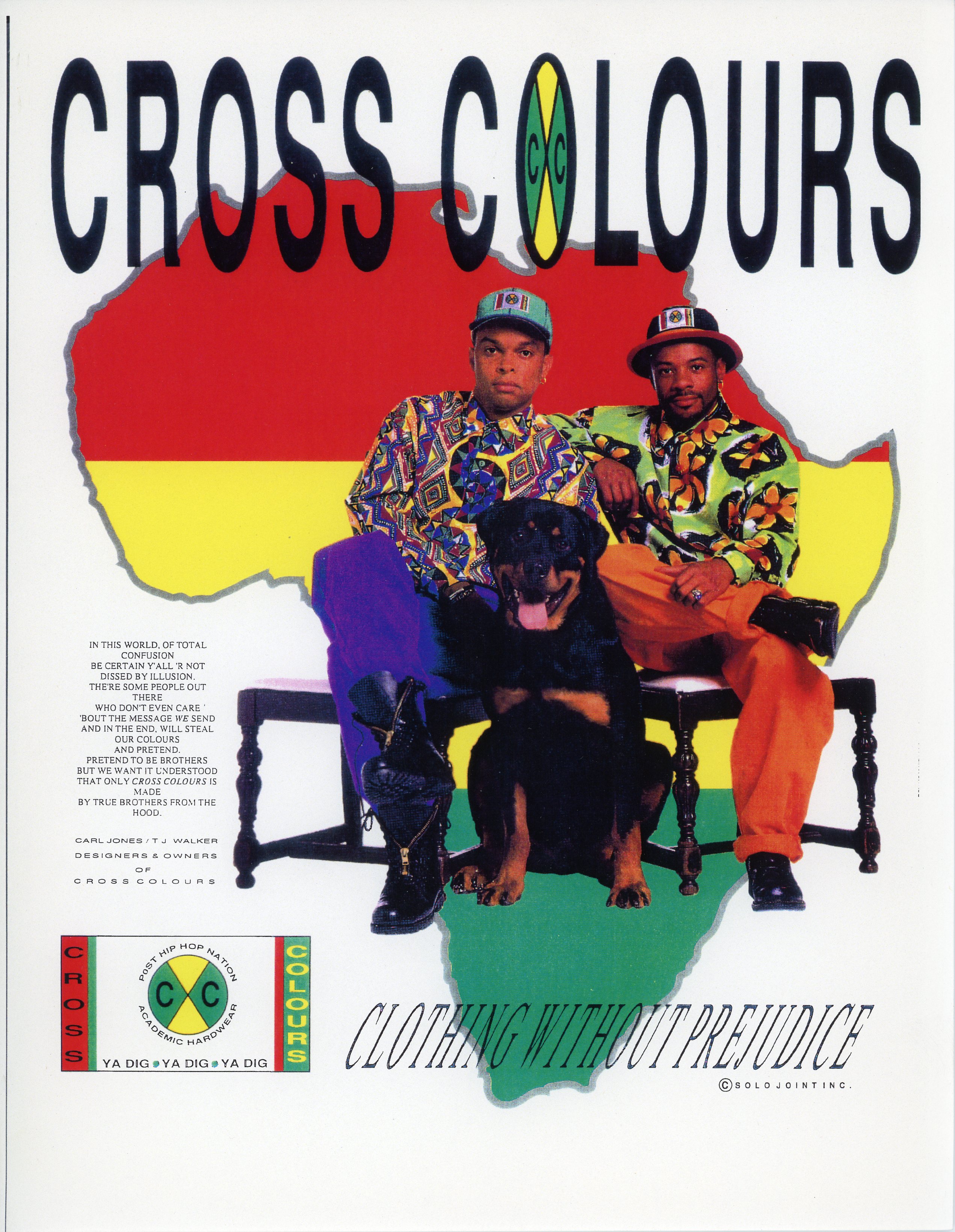