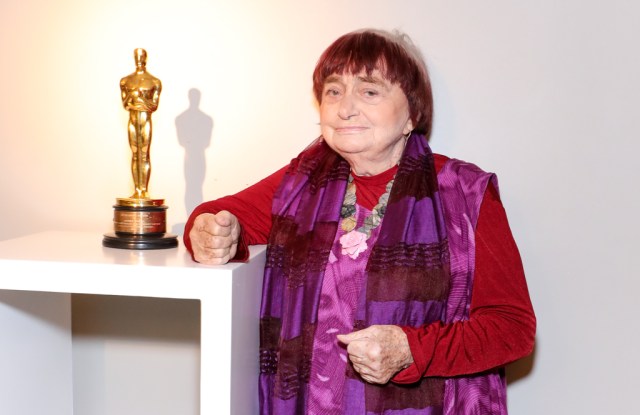 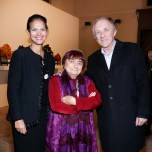 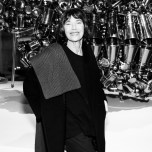 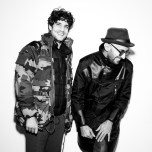 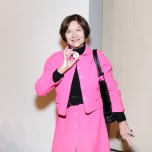 GOING FOR GOLD: Kering threw open the doors of its Paris headquarters on Monday for a party celebrating filmmaker Agnès Varda’s honorary Oscar.

Well-wishers including Isabelle Huppert, Jane Birkin, Louis Garrel, Jacques Audiard and fellow Oscar-winning director Michel Hazanavicius thronged around the diminutive director in the chapel of the historic building, built during the reign of Louis XIII.

Many of them wore badges proclaiming “I ❤️ Agnès” handed out by UniFrance, the agency dedicated to promoting French films around the world, which co-hosted the event. JR, the French photographer and artist who stars with Varda in their recent documentary “Faces Places,” sidled up proffering roasted chestnuts.

The Belgian-born director, 89, lapped up the attention, though she played down the fact that she was the first female director to be awarded an honorary Oscar.

“My movies never made any money, but I have received many prizes, because my cinema interests students, teachers and film clubs. I am successful, but in the margin, and I am comfortable in that margin,” added the director, one of the key figures in the French New Wave in the 1960s with films like “Cleo from 5 to 7” and “The Creatures.”

Director Tonie Marshall was transfixed by the gold statuette, displayed in a side room, which Varda received from Angelina Jolie at the Governors Awards last month. “It’s impressive,” she marveled. “Cinema is key to modern French culture, but the Oscar is the American dream of Hollywood that as cinephiles we have all been raised with.”

Huppert said the Oscar highlighted Varda’s influence on a generation of actors and directors.

“She is a pioneering woman who immediately saw the place that women could occupy in film, in particular, and in the world at large, so she really is an exemplary figure,” she said. “She inspires me every day. You only need to see her vitality, her energy.”

François-Henri Pinault, chairman and chief executive officer of Kering, noted that Varda was one of the first participants of the French luxury conglomerate’s Women in Motion program of film talks, launched at the Cannes Film Festival in 2015.

“She is an exceptional woman,” he said. “She has not lost her love of cinema. She is always surprised and always wants to work on something.” He noted that “Faces Places” is one of 15 films shortlisted to be nominated for the Oscar for best documentary at the 2018 Academy Awards. “That’s pretty incredible. We are crossing our fingers.”

Meanwhile, Kering is extending the reach of Women in Motion, which has partnerships with the Sundance and Tribeca film festivals, among others. Pinault, who is married to Salma Hayek, said the ramifications of the Harvey Weinstein sexual harassment scandal would likely impact the program in Cannes next year.

“We are going to try to go even further. It so happens that between the last edition and the next, there have been a number of events in Los Angeles. It will be interesting to see who will talk, what they will say and how,” said the executive, whose group owns brands including Gucci, Saint Laurent and Balenciaga.

“What is happening is good. That’s not to say this is happening because [of our initiative,] but it must have contributed a little bit, so it’s very, very good,” Pinault concluded.