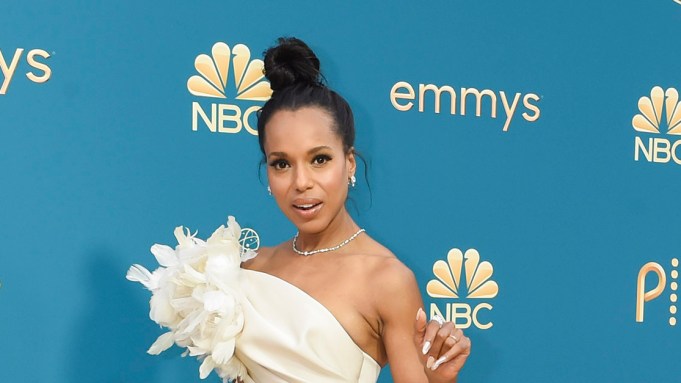 Kerry Washington made an elegant arrival on the 74th annual Emmy Awards red carpet in Los Angeles on Monday. The actress is nominated for the award ceremony’s Outstanding Variety Special (Live) Category as Executive Producer of “Live in Front of a Studio Audience: The Facts of Life and Diff’rent Strokes.”

Washington chose a white Elie Saab gown from the brand’s spring 2022 couture collection. It featured a sarong-like hemline, ruched gathering across the bodice, floral appliqué at the shoulder and hip, and a train.

She wore the piece with black stockings and Christian Louboutin’s So Kate pumps. Her accessories included a delicate silver necklace, bright earrings and rings.

The 2022 Emmy Awards honor the best performances and programs in television. “Saturday Night Live” cast member Kenan Thompson will host the event at the Microsoft Theater in Los Angeles. HBO’s “Succession” is leading the nominations with 25 nods, followed by “Ted Lasso” (20), “The White Lotus” (20), “Hacks” (17) and “Only Murders in the Building” (17). The Geena Davis Institute on Gender in Media will also be presented with the Governors Award in recognition of its work to promote gender balance in the entertainment industry.