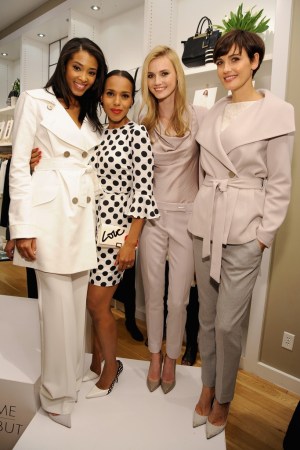 SCANDALOUS STYLE: Diehard “Scandal” fans packed into The Limited store at Glendale Galleria just outside of Los Angeles on Tuesday evening to preview the spring collection inspired by the ABC drama. All eyes were on Lyn Paolo, the TV show’s costume designer, and Elliot Staples, head of design at The Limited, until surprise guest Kerry Washington (a.k.a. Olivia Pope from the show) sneaked through the crowd, causing a collective gasp and grabbing of cellphones.

“Scandal” lovers from near and far were at the event. One fan traveled from San Diego while another made the trek down from San Jose to be rewarded with selfies with Washington.

Launching in stores nationwide on Feb. 13, the spring collection includes new looks that channel fellow female characters Mellie, Abby and Quinn. Inspired largely by feedback via social media from the fans, who dub themselves “gladiators” after Pope et al., it also marks the third installation of the collaborative line, following its debut last fall.

“We thought, ‘OK — how can we take those things that were most inspiring and put them into spring…the things that really resonated, the things that sold well, the things that people tweeted about the most,’” Washington said. “What’s so great about social media is that we are able to really be in communication with the fans.”

That is, communicative to a certain point. A tight-lipped Washington was careful not to disclose which pieces might make an on-screen appearance or if fans could expect more scandalous styles in the future.

“We’ll see. We don’t know. It’s very flattering that people keep asking,” Washington said. “I can’t say [because] that would be a spoiler.”