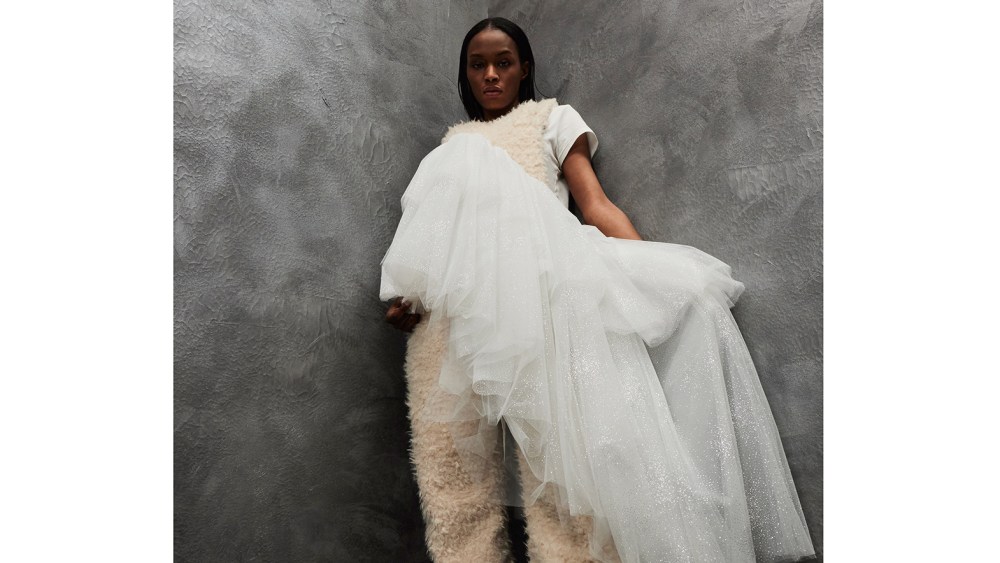 The rapper and actor sat surrounded by displays of his brand Members of the Rage’s first full ready-to-wear collection, for fall 2023, in a Right Bank Paris showroom on Thursday.

“I really wanted it to represent Scott Mescudi, who I am,” he said. “I think anybody that knows me will be able to look at this collection and feel my spirit all throughout it.”

The artist is highly inspired by ’90s culture — grunge, hip-hop — and described himself as a “super sci-fi freak.”

“So I wanted to add futuristic elements and things like this on top, to just give it a little spin and make it a little bit more fun,” he continued. “It’s almost like retro future-type vibes.”

Hanging along one wall was a brown faux-fur jacket, multihued floral shirts and dresses, plus camo bombers in a cool colorway of egg blue, olive and gray-green.

Mescudi said the unisex collection, which comes after a first T-shirt drop last year, will be sold worldwide in stores including Selfridges, Saks Fifth Avenue and H.Lorenzo. It came together in pieces: A knit, then a leather jacket idea would bubble up.

One of the first things he wanted to make was a black-and-red distressed sweater that’s an exact replica of the one Kurt Cobain wore. A varsity jacket with piping on the sleeves was another early creation.

“I felt like the varsity style has been around for decades, and no one has really tried to freak it or upgrade it or do anything new with it in all this time,” he said. “I wanted to take a stab at it.”

Mescudi drew a design in his sketchpad and that came out exactly as he wanted. He enjoys mixing fabrics in unexpected ways. There’s an overall made of sherpa, with tulle running down it, for instance.

“I’m always coming up with ideas,” he continued. “If I’m in Tokyo, I’m seeing all sorts of vibes. The fashion out there is totally inspiring.

“I am just a fan of fashion,” added Mescudi, who planned to go to the Sacai show.

“Chitose [Abe] is a new friend of mine,” he said of the brand’s designer. “We met recently when I was in Tokyo and we really hit it off. We’re actually working on something special. I can’t say exactly what it is.”

His goal is for MOTR to ultimately become a lifestyle brand. Meanwhile, Mescudi remains been busy in other domains. He has a cameo in the recently released movie “House Party,” and will appear as a dad in “Crater” from Disney+.

Mescudi will begin writing his memoir next month, but a dream is to direct his own films.

“It’s up there with creating this line,” said Mescudi. “Doing this has given me a load of confidence. I feel like I can do anything now. I’m just really inspired.”