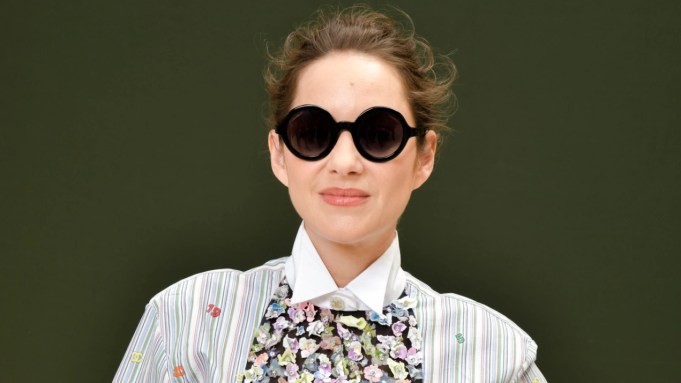 Chanel took guests for a ride this season, or at least to an equestrian center in a park outside of Paris, for a cowgirl-influenced collection full of Western boots, hats, full skirts and fringed shawls.

Keira Knightley, who started as a face of the house under Karl Lagerfeld a decade and a half ago, reflected on growing up with the brand. “It’s just really wonderful to be here and see Virginie [Viard] shine,” she said.

She also took a philosophical approach to the changes the film business has seen in all those years. “Now there are some amazing roles for older women. The structure of the business makes it difficult for women with children, and that has always been the case. That’s where it’s a tricky one, but I think it’s wonderful that we are being allowed to grow up and to look at stories from women of all ages, and to be able to see fashion for women of all ages. There’s further to go, but there is movement.”

Case in point: her new film “Boston Strangler,” in which she plays a journalist who pursued the case. “She was a female journalist who was not taken seriously, and also the fact that nobody was paying attention to the killings because they were middle-aged women to begin with,” she explained. “So it’s both a film about the most horrific form of violence against women, but equally about female power.

“I’ve tried to make a career out of playing women who I find interesting, who I find inspiring, who are not perfect, but who are complicated kind of creatures. It’s always what’s kind of driven me, and so this kind of felt like a really good one, an important one.”

Taraji P. Henson was channeling the spirit of her upcoming film, “The Color Purple,” in an indigo sequined top. She had taken a day off from filming for a very quick trip to the French capital for her first couture show, before hopping back on the plane for a 7 a.m. call time in Georgia. “What a way to come, right?” she joked of her first couture show.

The new musical, produced by Steven Spielberg and Oprah Winfrey, is “a beautiful mixture of the Broadway play, the book, and the film,” and Henson promised that it’s Oscar bait. “It’s gonna be movie of the year. I’m telling you right now.”

She’s been learning the dance routines and recording for the soundtrack since February, with tons of rehearsal. “It’s grueling, but it’s fun,” she said of 18-hour days.

Henson sang praises for the costumes and more modest mode of the era. “I love the way women dressed because we left so much to the imagination, but it was still very sexy,” she said. “We see just a little sliver of skin and it’s just sexy. The way the clothes fit, I just feel like a woman and a lady.”

Lucy Boynton has moved on from Queen to play the Queen of France as Marie Antoinette in a new film “Chevalier,” opposite Kelvin Harrison Jr. as the titular character. She called it a “modern twist” on the historical biopic. “There’s definitely a modern eye and a sense of understanding of themes like convenient allyship, especially when it came to my character, and race. But it definitely stays true to the essence of that period, so it’s kind of a rock’n’roll marriage.”

As for the rumored upcoming Marianne Faithfull biopic, it’s still in the “we’ll see” stage, she said.

Sigourney Weaver did a deep dive into details about her role in the upcoming “Avatar 2” film. During training from Navy SEALs, she learned to free dive and hold her breath for six and a half minutes. Weaver hopes the film helps focus attention on marine issues. “Hopefully it will transform the way the audience sees the oceans and the creatures in the ocean,” she said.

For the day, many of the guests were in Chanel pearls, including Rina Sawayama, who had piled on the jewelry. “I wanted to really layer up today, I just really like the spirit. It’s my first couture week in Paris, and I’m really speechless because this is like one of my dreams come true,” she said.

Sawayama is fresh off the release of her cowboy-themed single “This Hell.” “I’ve got a lot of country influences in my music, so seeing it mixed with classic Chanel, I was like, our brains are matching right now,” she said of the runway vibe. It was an obsession with Kacey Musgraves during pandemic lockdown that led her to write the full album, which she’ll release and tour in September.

“It was very hard to motivate myself to try and write an album during lockdown, but I’m really glad I pushed through and came out with something I’m really proud of that blends the genres together,” she said. Seated front row with stylist Jordan Kelsey, she was keeping an eye out for tour looks.

The writing process is also proving to be a new challenge for Clémence Poésy, who is adapting Anna Hope’s novel “Expectation” into a script for her first feature. “It’s a long and interesting process, just the back and forth between thinking we’ve got the best idea in the world and then the next day realizing it doesn’t work at all,” she laughed, empathizing with screenwriters. “I just don’t know how they do it.”

Marion Cotillard admitted that she loves coming to the shows because she feels free to take fashion risks that she couldn’t take in her daily life as a mom. Tuesday’s show saw her in barely there short shorts and a floral tuxedo shirt. “It wouldn’t be practical,” she joked. “But it’s fun to explore. I have this tendency to avoid something that is not risky and that is, from my point of view, boring.”

As for working with Viard, she added: “She knows the woman’s body in a kind of different way, because she lives in it.”