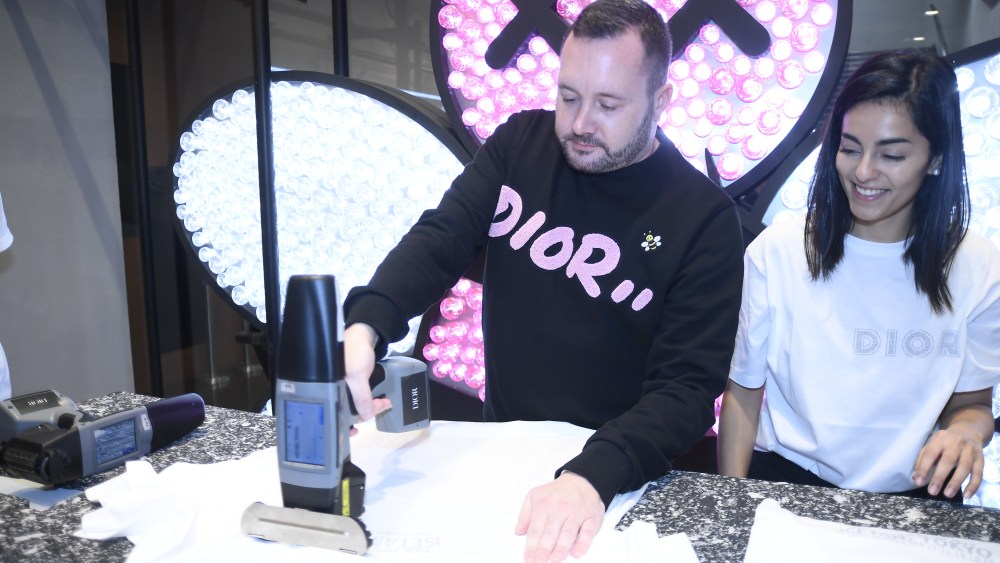 BUZZING INTO TOKYO: Roughly 100 customers lined up outside Isetan’s men’s building in Shinjuku on Wednesday morning, waiting for the doors to open so they could get their hands on the spring 2019 men’s capsule collection that Kim Jones designed for Dior. It is the first offering released by the designer since he took over as artistic director.

For the capsule, Jones tapped New York-based artist Brian Donnelly, known professionally as Kaws, to reimagine the brand’s classic bee motif, as well as to create a new Dior logo specially for the collection.

At the pop-up, customers can purchase T-shirts to be customized in front of them with a spray gun that dispenses permanent ink in the chosen design. They are also printed with the date and the number of their purchase.

Exclusive to the Tokyo store are items that feature the Kaws bee in pink rather than yellow, including T-shirts, sweatshirts and small leather goods. Also available are Japanese selvedge denim jeans embroidered with the traditional boro method, and the iconic Dior Saddle bag, which Jones has reinterpreted for men for the first time.

Sunglasses and belts with buckles designed by Matthew Williams of Alyx and jewelry by Yoon Ahn complete the offering.

The Tokyo pop-up is the first place in the world where the capsule is sold, followed by the brand’s Ginza flagship store on Thursday. From Saturday, additional pop-ups will open at Dover Street Market in London, Maxfield in Los Angeles and at Dubai Sole.